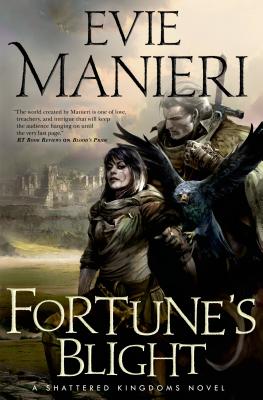 Fortune's Blight by Evie Manieri continues the conflict begun in Blood's Pride. Victory for the Shadari rebels has come at a terrible price. Hardship, superstition, and petty feuds poison King Daryan's young reign, and entire families are vanishing without a trace. Help is nowhere to be found, for their Nomas allies have troubles of their own and the Mongrel, plagued by the sins of her violent past, has disappeared.

While Daryan struggles to maintain the peace, Eofar and Rho are racing to their northern homeland to plead—or fight—for the Shadar's independence. But Norland has changed, and they soon find themselves embroiled in the court politics of an empire about to implode.

Meanwhile, the Mongrel's path carries her deep into Norland's frozen wastes to redeem a promise—one that forces her into the heart of the growing conflict.

As the foundations of the two far-flung countries begin to crack, an enigmatic figure watches from a tower room in Ravindal Castle. She is old, and a prisoner, but her reach is long, and her patience is about to be rewarded....

"[A] carefully crafted novel, which will draw in new and returning readers alike. The suspense, character development, and worldbuilding are all superior.” —Publishers Weekly

"Immediately begins to build on the high stakes and suspense of [Blood's Pride], but will also be understood and loved by readers unfamiliar with the series.” —RT Book Reviews

"Intrigue, betrayal and old rivalries play out against the fires of revolution. Hang on for a wild ride!” —Gail Z. Martin, author of The Dread: Book Two in The Fallen Kings Cycle

EVIE MANIERI has a degree in Medieval History and Theatre from Wesleyan University and is the author of Blood's Pride. She lives with her husband and daughter in New York City.
Loading...
or
Not Currently Available for Direct Purchase