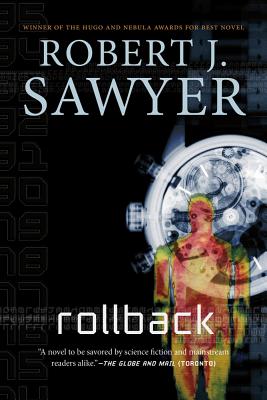 Dr. Sarah Halifax decoded the first-ever radio transmission received from aliens thirty-eight years ago. Now, a second message is received, and Sarah, now eighty-seven, may hold the key to deciphering this one, too…if she lives long enough.

A wealthy industrialist offers to pay for Sarah to have a rollback—a hugely expensive experimental rejuvenation procedure. She accepts on condition that Don, her husband of sixty years, gets a rollback, too. The process works for Don, making him physically twenty-five again. But in a tragic twist, the rollback fails for Sarah, leaving her in her eighties.

While Don tries to deal with his newfound youth and the suddenly vast age gap between him and his wife, Sarah heroically struggles to figure out what a signal from the stars contains before she dies.

Praise For Rollback: A Novel…

“This is what SF is supposed to be about: Discovery as carried out by real people. A joy to read; a superb novel.” —Jack McDevitt, author of Odyssey

“Sawyer's near-future speculative fiction reveals many advances in medicine and robotics. But it's the humanness of the closeness (and the distance) between Sarah and Don that makes Rollback an early candidate for sci-fi book of the year.” —The Kansas City Star