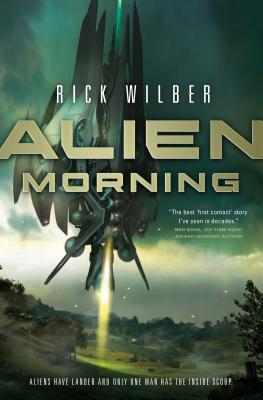 Peter Holman is a freelance sweeper. The year 2030 sees a new era in social media with sweepcasting, a multisensory interface that can convey every thought, touch, smell, sight, and sound, immersing the audience in another person's experience.

By fate, chance, or some darker design, Peter is perfectly positioned to be the one human to document the arrival of the aliens, the S'hudonni.

The S'hudonni offer advanced science in exchange for various trade goods from Earth. But nothing is as simple as it seems. Peter finds himself falling for, Heather Newsome a scientist chosen by the S'hudonni to act as their liaison. Engaged to his brilliant marine biologist brother, Tom, Heather is not what she seems. But Peter has bigger problems. While he and his brother fight over long-standing family troubles, another issue looms: a secret war among the aliens, who are neither as benevolent nor as unified as they first seemed.

Peter slowly learns secrets he was never meant to know, about the S'hudonni, and about his own family. Realizing that he has been used, he can only try to turn his situation around, to save what he can of his life and of the future of Earth.

"An intriguing look at colonization from the viewpoint of those being taken over.” —Publishers Weekly

“This is the start to a great trilogy . . . and an enjoyable read for any lover of first-contact sf.” —Booklist

"A first contact story like no other: it eerily and wittily depicts a fast-forward vision of a near-future in which our own world is both utterly recognizable and utterly transformed. Once I started it, I couldn’t put it down. Neither will you." –-Elizabeth Hand, author of Generation Loss, Available Dark, and Hard Light.

"Brilliantly crafted, fiercely real, Alien Morning is first contact as it may very well happen: experienced by one, shared by all who subscribe. Relentless and original, this is science fiction that matters now. Highly Recommended." – Julie E. Czerneda, author of The Clan Chronicles

"A startlingly credible reflection of how our society copes--or doesn't cope--with its own strangeness." -- Stephen R. Donaldson

"Rick Wilber's new novel brings together elements of a vivid near-future family saga and the global consequences of the arrival on Earth of technologically superior aliens. Through a charming first-person celebrity narrator who struggles with his flaws, Wilber deploys these elements so that the human drama reflects and illuminates the interspecies conflict, and vice versa, in a compellingly original way. You'll not soon forget either Peter Holman, the narrator, or Twoclicks, the S'hudonni prince with his alien antagonists and allies." -- Michael Bishop, author of A FUNERAL FOR THE EYES IF FIRE and PHILIP K. DICK IS DEAD, ALAS

"Effortlessly mashes up its big science fiction theme of mysterious aliens and the terrorists who love them with a gritty backstage tour of semi-professional sports and also with an unflinching look at a troubled family. . . . Rick Wilber has definitely arrived!" -- James Patrick Kelly, winner of the Hugo, Nebula and Locus awards

“What happens when journalists use senses, not just words? This nifty look at an eye-opening future is well worth your time.” —Gregory Benford, author of Timescape

“Chalk up another home run for Wilber, one of the most thoughtful and literate science-fiction writers working today. Alien Morning is classic shoe-on-the-other-foot speculation about Earth itself being colonized, and Wilber pulls it off with sophistication and panache.” — Robert J. Sawyer, Hugo Award-winning author of Quantum Night

“A rousing adventure. Kept me guessing to the last line.” —Jack McDevitt

“An engaging blend of humor, skepticism and wonder, and the futuristic elements of the story sound in many cases all too probable.” —Tampa Bay Times