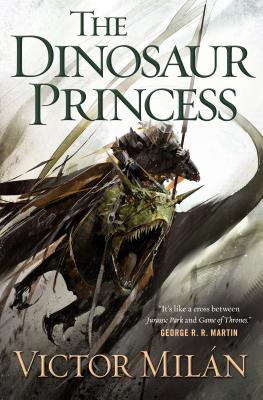 The Dinosaur Princess is a thrilling epic fantasy adventure set in an alternative world of intrigue, beauty, brutality…and dinosaurs.

WELCOME TO PARADISE: A primordial world with every species of dinosaur, large and small. And humans, who were brought to this world on the whim of the gods. Knights ride into battle on Triceratops; their heroes lead them on T-Rexes.

Karyl Bogomirskiy is one such hero. Once, he held power. Betrayed by those closest to him, he was resurrected by the Fae, magical beings native to the world, who seek to use him in their eternal battle against alien gods. Karyl just wants to be left in peace, reluctant to be anyone’s tool, much less a savior.

But the gods have returned to judge their human experiment and to finally rid the planet of the Fae. And while Karyl doesn’t feel like a hero, he’s humanity’s last best hope.

The Dinosaur Princess is the newest epic fantasy adventure set in a world where knights ride armored dinosaurs into battle, hailed by George R. R. Martin as "A cross between Jurassic Park and Game of Thrones."

Praise for The Dinosaur Lords

“Politics and panache, style and sex—and more terrible lizards than you can shake a saber at. It’s a rich and sprawling read that hooks you at the first page and keeps you guessing, gasping, and cheering all the way to the last.”—Cherie Priest

“The Dinosaur Lords has lords, ladies, castles, swords, eldritch gods, not-quite zombies, a not-quite Earth, pirates, jungles, and…dinosaurs! It also has a complex set of varied characters who engage with their heroism and commonplace faults, and a driving plot that fascinates as we learn more about this world that isn’t but should have been. And there are dinosaurs. Knights riding dinosaurs. Prepare to be entertained!”—S.M. Stirling

“Milán skillfully crafts his characters, giving significant thought to just how knights might use dinosaurs…Readers who pick this up for the gimmick will relish it for the able storytelling.”—Publishers Weekly

Acclaimed author Victor Milán (1954-2018) was best known for his award winning science fiction novel Cybernetic Samurai and his fantasy series The Dinosaur Lords. In previous worlds he was a cowboy and Albuquerque's most popular all-night prog-rock DJ.
Loading...
or
Not Currently Available for Direct Purchase