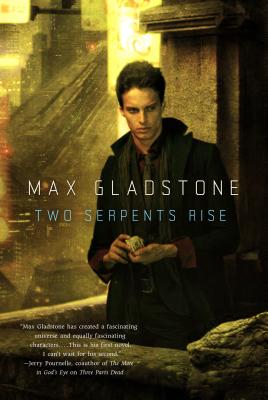 In "Two Serpents Rise "by Max Gladstone, shadow demons plague the city reservoir, and Red King Consolidated has sent in Caleb Altemoc casual gambler and professional risk manager to cleanse the water for the sixteen million people of Dresediel Lex. At the scene of the crime, Caleb finds an alluring and clever cliff runner, Crazy Mal, who easily outpaces him.

But Caleb has more than the demon infestation, Mal, or job security to worry about when he discovers that his father the last priest of the old gods and leader of the True Quechal terrorists has broken into his home and is wanted in connection to the attacks on the water supply.
From the beginning, Caleb and Mal are bound by lust, Craft, and chance, as both play a dangerous game where gods and people are pawns. They sleep on water, they dance in fire...and all the while the Twin Serpents slumbering beneath the earth are stirring, and they are hungry.

“Gladstone outdoes himself in this exciting and imaginative return to the brilliantly realized world of Three Parts Dead.”
—Publishers Weekly (starred review) on Two Serpents Rise


“If you’ve been looking for a different kind of fantasy—part urban, part epic, maybe something in between—you’ll thoroughly enjoy this novel.”
—Carrie Vaughn, author of the Kitty Norville series, on Two Serpents Rise


“I really liked it. . . . It’s steampunk/religious/thriller/alt-verse/fantasy. It's gritty and complicated but I enjoyed it a lot because it was different. . . . Definitely on board for another!”
—Felicia Day, writer, producer, and star of The Guild, on Three Parts Dead

“One of the best debut fantasy novels I've read in years. . . an entertaining and intelligent story . . . . Fans of genre-bending pulp, courtroom dramas, well-built worlds, interesting characters and new paradigms of magic and power will be just as pleased by this book as I was. And just as anxiously awaiting Gladstone's next one.”
—io9, on Three Parts Dead

“A book which intrigued, thrilled, and delighted me by turns, and had me cackling in righteous satisfaction at the conclusion. . . . this is a seriously good book, and Max Gladstone is a writer to watch out for.”
—Strange Horizons, on Three Parts Dead

“The Girl With the Dragon Tattoo meets The Hundred Thousand Kingdoms.... Three Parts Dead elevates the word “awesome” back to its godly context  with its world building, compelling characters, and action that doesn’t let up until the last page....  I’ll be eagerly awaiting whatever he chooses to write next.”
—All Things Urban Fantasy (“five-bat, near-perfect” review)

MAX GLADSTONE went to Yale, where he wrote a short story that became a finalist in the Writers of the Future competition. He lives in Boston, Massachusetts. Two Serpents Rise is his second novel.
Loading...
or
Not Currently Available for Direct Purchase