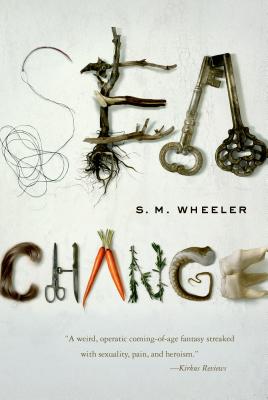 The unhappy child of two powerful parents who despise each other, young Lilly turns to the ocean to find solace, which she finds in the form of the eloquent and intelligent sea monster Octavius, a kraken. In Octavius's many arms, Lilly learns of friendship, loyalty, and family. When Octavius, forbidden by Lilly to harm humans, is captured by seafaring traders and sold to a circus, Lilly becomes his only hope for salvation. Desperate to find him, she strikes a bargain with a witch that carries a shocking price.

Her journey to win Octavius's freedom is difficult. The circus master wants a Coat of Illusions; the Coat tailor wants her undead husband back from a witch; the witch wants her skin back from two bandits; the bandits just want some company, but they might kill her first. Lilly's quest tests her resolve, tries her patience, and leaves her transformed in every way.

A powerfully written debut from a young fantasy author, S.M. Wheeler's "Sea Change" is an exhilarating tale of adventure, resilience, and selflessness in the name of friendship.

“This debut novel begins in a hushed voice, then, slowly, the beauty of Wheeler’s writing, the beguiling character of Lilly, and the tale’s deeply complicated revisions and distortions concerning sex and gender reach utterly absorbing heights. Wheeler’s truly original, fanciful, and transformative story will delight fantasy lovers of all types, as well as those readers attached to coming-of-age narratives and feminist SF.”
—Library Journal (starred review)

“Wheeler's stunning debut is a sophisticated fantasy whose lush descriptions, lyrical dialogue, and engaging structure are reminiscent of the very best fairy tales... This profoundly beautifuly evolution of fairy tale elements will have readers eagerly awaiting Wheeler's next book.”

“Takes the alien brutality of Grimm’s tales...and transmutes the familiar pieces of magic and friendship, villainy and madness, love and happily ever after into something altogether new. Haunting, heart wrenching, and beautiful.”
—All Things Urban Fantasy (5 Bat Review)

“Sea Change is the very best kind of fairy tale: sharp, shimmering, thorny, and true. A beautiful debut about monsters, friendship, and the blurry lines between.”

“A harrowing fairy tale of loss, sacrifice, and growth.”

S.M. Wheeler lives in California. Sea Change is her first novel.
Loading...
or
Not Currently Available for Direct Purchase