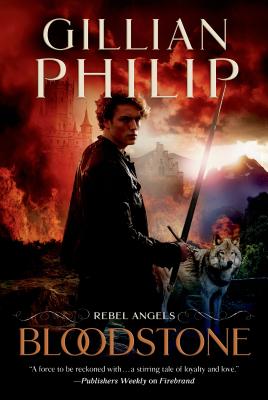 "Bloodstone" is the second novel in Gillian Philip's critically acclaimed Rebel Angels series, debuting in the United States for the first time.

For centuries, Sithe warriors Seth and Conal MacGregor have hunted for the Bloodstone demanded by their Queen. Homesick, and determined to protect their clan, they have also made secret forays across the Veil. One of these illicit crossings has violent consequences that will devastate both their close family, and their entire clan.

In the Otherworld, Jed Cameron, a feral, full-mortal young thief, becomes entangled with the strange and dangerous Finn MacAngus and her shadowy uncles. When he is dragged into the world of the Sithe, it's nothing he can't handle until time warps around him, and menacing forces reach out to threaten his infant brother. In the collision of two worlds, war and tragedy are inevitable, especially when treachery comes from the most shocking of quarters .

GILLIAN PHILIP is the author of the Rebel Angels series, including Firebrand and Bloodstone. She was born in Glasgow, lived for twelve years in Barbados, and now lives in the north of Scotland with her husband, twin children, three dogs, two sociopathic cats, a slayer hamster, three chickens, and a lot of nervous fish.
or
Not Currently Available for Direct Purchase
Copyright © 2020 American Booksellers Association