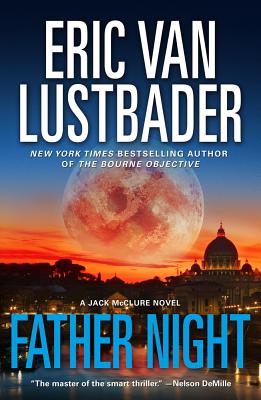 A tidal wave of reform is sweeping across the Middle East. Many lurk in the shadows, eager to seize power--giants of a vast criminal underworld, fueled by revenge and vengeance. Their wars know no end. Their power knows no bounds.

At the center of it all are two men who are inches away from holding the world in their hands: one is known as Dyadya Gourdjiev and the other is known only as the Syrian.

Department of Defense special agent Jack McClure has followed this trail of shadows and lies right into the arms of Gourdjiev's alluring, powerful granddaughter, Annika Dementiev. The lovers are in Moscow when news of Dyadya's failing health draws a slew of vultures--circling, anxious to seize the empire of secrets he spent a lifetime building. Jack and Annika find themselves locked in battle to ensure his safety but when it comes to Dyadya, nothing is as it seems.

Alli Carson, the child of a dead US president, has become Jack's surrogate daughter. While Jack is in Russia, Alli is targeted by a cyber-stalker who knows more about her than anyone should. With no one to trust but her friend, Vera Bard, Alli is determined to discover the truth, but her path forces her to come face-to-face with the nightmarish terror of her past.

As these two stories play out, Secretary of Defense Dennis Paull, with the help of detectives Nona Hendryx and Alan Frain, follows a trail of lies, corruption, and secret pacts that begins with Washington D.C.'s Head of Detectives.

All paths collide at the feet of one man, an old legend adapting to an ever-changing landscape a man history might have forsaken, but whose heinous evil is still very much alive: Father Night.

Eric Van Lustbader is the author of many "New York Times" bestselling thrillers, including "First Daughter, Last Snow," and "Blood Trust." Lustbader was chosen by Robert Ludlum's estate to continue the Jason Bourne series, and his Jason Bourne novels include "The Bourne Legacy" and "The Bourne Betrayal." He and his wife live in New York City and on the South Fork of Long Island.
Loading...
or
Not Currently Available for Direct Purchase