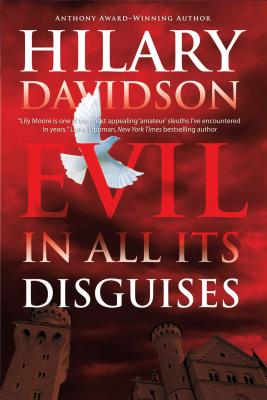 Evil in All Its Disguises

Anthony Award-winner Hilary Davidson weaves a thrilling story of paranoia, vengeance, and murder with "Evil in All Its Disguises."

When travel writer Lily Moore joins a group of journalists for an all-expenses-paid press junket to Acapulco, Mexico, she expects sun, sand, and margaritas. Instead, she finds that the Mexican city, once the playground of Hollywood stars, is a place of faded glamour and rising crime. Even the luxurious Hotel Ceron, isolated from the rest of the town, seems disturbing to her, with its grand, empty rooms, ever-watchful staff, and armed guards patrolling the grounds.

Lily isn't the only one who suspects something rotten under the hotel's opulent facade. Skye McDermott, another journalist on the trip, asks Lily for help with an article she's working on about fraud and corruption in the hotel industry. Skye claims she's eager to write a piece of real journalism rather than the fluff she's known for. But she also lets slip that she's deeply upset at a lover who jilted her, and she plans to exact her revenge by exposing his company's illegal activities.

After Skye disappears suddenly, Lily suspects that her friend is in grave danger. But the hotel's staff insists that everything is fine and refuses to contact the police. Only after Lily tries and fails to leave the Hotel Ceron does she discover the truth: the journalists are prisoners in a gilded cage.

Too late, Lily realizes that she has been maneuvered into the role of bait in a vicious, vengeful plot. Faced with unthinkable choices, Lily must summon all her strength to survive, confront the past she's still running from, and save other lives.

"Smoothly sinister characters and a creepy Poe-like atmosphere keep the pages turning." "Publishers Weekly" on "Evil in All Its Disguises.


Praise For Evil in All Its Disguises…

“Smoothly sinister characters and a creepy Poe-like atmosphere keep the pages turning.”—Publishers Weekly on Evil in All Its Disguises

“Anthony Award winner Davidson briskly launches into this twisting tale, and readers will have no choice but to follow, as they will seek the answers right along with Lily.”—Library Journal on Evil in All Its Disguises

“The crimes and the clues will keep you going, trying to unravel what is really going on and who all the bad guys are.”—RT Book Reviews on Evil in All Its Disguises

“Hilary Davidson delivers the goods—an exotic, atmospheric setting, a rocket-paced plot, and a bright, engaging heroine in Lily Moore.  Evil in All Its Disguises is a top-notch mystery—exciting, harrowing, and smart.”—Lisa Unger, New York Times bestselling author of Heartbroken


"Davidson has a great eye for the small detail that leads the reader into the spot and her puzzle plots are beautifully organized and crafted."—The Globe and Mail

"Davidson knows how to write a galloping page-turner, and the plot twists are plentiful."—Quill & Quire

HILARY DAVIDSON won the Anthony Award for Best First Novel for The Damage Done. That book also earned a Crimespree Award and was a finalist for the Arthur Ellis and Macavity awards. Davidson's widely acclaimed short stories have been featured in publications from Ellery Queen to Thuglit and in many anthologies. A Toronto-born travel journalist and the author of eighteen nonfiction books, she has lived in New York City since October 2001.
Loading...
or
Not Currently Available for Direct Purchase