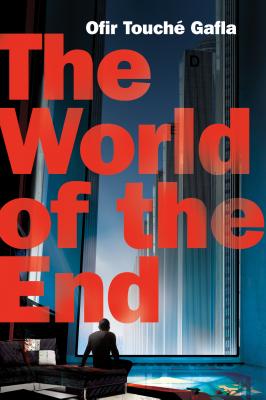 The World of the End

As an epilogist, Ben Mendelssohn appreciates an unexpected ending. But when that denouement is the untimely demise of his beloved wife, Ben is incapable of coping. Marian was more than his life partner; she was the fiber that held together all that he is. And Ben is willing to do anything, even enter the unknown beyond, if it means a chance to be with her again.

One bullet to the brain later, Ben is in the Other World, where he discovers a vast and curiously secular existence utterly unlike anything he could have imagined: a realm of sprawling cities where the deceased of every age live an eternal second life, and where forests of family trees are tended by mysterious humans who never lived in the previous world. But Ben cannot find Marian.

Desperate for a reunion, he enlists an unconventional afterlife investigator to track her down, little knowing that his search is entangled in events that continue to unfold in the world of the living. It is a search that confronts Ben with one heart-rending shock after another; with the best and worst of human nature; with the resilience and fragility of love; and with truths that will haunt him through eternity.


Praise For The World of the End…

“Poignant and funny...part romance, part mystery, and part science fantasy…. Gafla creates an interconnected puzzle of living and dead characters and their stories that will shock, amuse, and illuminate the nature of humans and their inevitable end.”

“Lyrical and flowing. Gafla creates a rich world of networked characters, both living and dead, and explores how human nature plays a role even in death.”
—RT Book Reviews, 4 1/2 stars

“Broad themes of life, death, and afterlife, coupled with satiric touches on modern existence and the meaning of religion, make this a major example of literary speculative fiction at its best, with an appeal that crosses genres into mainstream fiction.”
—Library Journal

“The infrastructure of the Other World alone is enough to justify picking this book up, and the cast of characters, Ben’s heartening but occasionally frustrating confidence, and a story concluded in an open-ended but ultimately satisfying manner make the reading experience a pleasure.”
—Booklist

“I've seldom read a book so strange and so assured.  Gafla's vivid characters, his matter-of-fact underworld, and his mysteriously interconnected mortal universe confront readers with the awkwardness, desperation, and humor of life and its many endings.”
—Max Gladstone, author of Three Parts Dead

“The World of the End is a refreshing, original, and particularly, impressive work... The writer displays virtuosity in moving from a film-noir kind of novel to dealing with metaphysical issues regarding post-mortem life, then returning to an adventure story incorporating innumerable motifs from the world of science fiction. His most prominent ability is the philosophical depth he achieves without being over-smart or getting lost.”
—Time Out (Israel)

Ofir Touche Gafla is a national bestselling author in his native Israel. His first novel, The World of the End, won the 2005 Geffen Award for the best fantasy/science fiction novel of the year and the 2006 Kugel Award for Hebrew literature. His later novels include The Cataract in the Mind's Eye. Behind the Fog, The Day the Music Died, and The Book of Disorder. He teaches creative writing in the Sam Spiegel School of TV and Cinema in Jerusalem.
Loading...
or
Not Currently Available for Direct Purchase