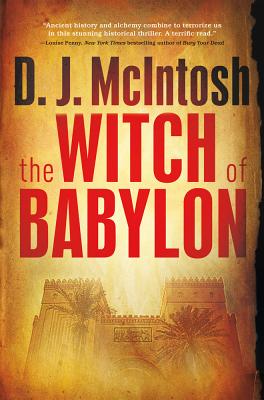 The Witch of Babylon

Out of the searing heat and sandstorms of the infamous summer of 2003 in Baghdad comes "The Witch of Babylon," a gripping story rooted in ancient Assyrian lore and its little-known but profound significance for the world.
John Madison is a Turkish-American art dealer raised by his much older brother, Samuel, a mover and shaker in New York's art world. Caught between his brother's obsession with saving a priceless relic looted from Iraq's National Museum and a deadly game of revenge staged by his childhood friend, John must solve a puzzle to find the link between a modern-day witch and an ancient one.
Aided by Tomas, an archaeologist, and Ari, an Iraqi photojournalist two men with their own secrets to hide John races against time to decipher a biblical prophecy that leads to the dark history behind the science of alchemy. Kidnapped by villainous fortune hunters, John is returned to Iraq, where a fabulous treasure trove awaits discovery if he can stay alive long enough to find it.
International thriller-writing sensation D. J. McIntosh makes her American debut with "The Witch of Babylon.


Praise For The Witch of Babylon…


“Rich in characters, puzzles, and historical significance, this shivery thriller is so good I wish I had written it.”
—Eric Van Lustbader, New York Times bestselling author of Blood Trust and the Jason Bourne series

“Soaked in the blood of centuries, yet as fresh as tomorrow's headlines. D.J. McIntosh is articulate, literate, and scary.”—Alan Bradley, bestselling author of The Sweetness at the Bottom of the Pie “The Witch of Babylon is at once a complex art-history mystery centered on biblical scholarship, a breath-stealing thriller set in the early months of the Iraq invasion, and an intellectual exploration of links between Mesopotamian myths and European alchemical processes.”—Mystery Writers Ink

D. J. McIntosh's The Witch of Babylon has been sold in nineteen countries, was short-listed for the Crime Writers Association Debut Dagger Award, and won a Crime Writers of Canada Arthur Ellis Award for best unpublished novel. McIntosh is a member of the Canadian Society for Mesopotamian Studies. She is a strong supporter of Reporters Without Borders and the Committee to Protect Journalists.
Loading...
or
Not Currently Available for Direct Purchase