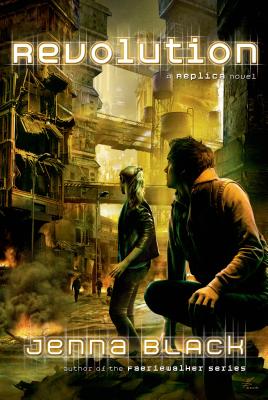 In Revolution, Nadia Lake and Nate Hayes find themselves at the center of a horrifying conspiracy in the action-packed finale of Jenna Black's SF romance series that began with Replica

Paxco has a new ruler.

Dorothy Hayes claims to be the secret daughter of the recently-assassinated Chairman. She also claims that Nate Hayes, the true heir and her supposed brother, was the one who murdered their father.

But with Dorothy in power, Nate and Nadia know their days are numbered. They have nowhere to run except the Basement, Paxco's perilous and lawless slums. But Dorothy is far from content with driving her enemies into hiding.

She wants them dead.

“Likely to be gobbled up by fans of the genre.” —Kirkus Reviews on Replica

“This fast-paced, futuristic novel will delight fans of Orwellian science fiction, as well as readers of dystopian literature. Black explores love, loss, and loyalty against the backdrop of a chillingly familiar future world.” —VOYA on Replica