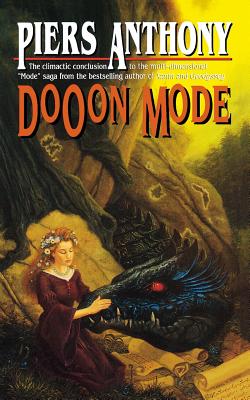 Beyond the world we know there is a multiverse of Modes where many strange realities interlock in an infinitely intricate pattern, and a perverse and deranged Emperor plays a deadly multidimensional game with human pawns as his slaves.

Now, with DoOon Mode, Piers Anthony at last delivers the breathtaking climax to this awesome saga. Fearing the heroine Coleen's dawning power, the depraved Emperor Ddwng dispatches a terrible Mind Monster to assault her soul and bend her to his will. To protect herself, and those she loves, Coleen must journey back through many worlds to her own home on Earth, face her deepest and darkest fears, and draw the strength for a final confrontation to save the multiverse from tyranny and domination.

Piers Anthony is one of the world's most prolific and popular fantasy authors and a New York Times bestseller twenty-one times over. His Xanth novels, including Esrever Doom, Luck of the Draw, and Well-Tempered Clavicle, have been read and loved by millions of readers around the world. While he is best known for his science fiction and fantasy, Anthony incredibly versatile, having also written several novels in other genres, including historical fiction and horror. He lives in Central Florida.
Loading...
or support indie stores by buying on