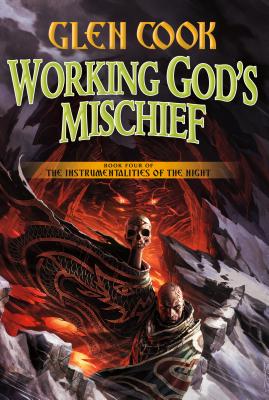 Book Four of The Instrumentalities of the Night

But there is something new under the sun. The oldest and fiercest of the Instrumentalities has been destroyed--by a mortal. There is no new Windwalker, nor will there ever be.

The world, battered by savage change, limps toward its destiny. And the ice is coming.

Working God's Mischief is the savage, astounding new novel of The Instrumentalities of Night, by Glen Cook, a modern master of military fantasy.


Praise For Working God's Mischief: Book Four of The Instrumentalities of the Night…

“Cook follows up on his lauded Black Company military fantasy with another powerful series, combining a fast-moving plot with a harsh, credible world of religious conflicts, ravenous aristocrats, and refugees struggling to survive.” —VOYA on Lord of the Silent Kingdom

“The thing about Glen Cook is that with The Black Company he singlehandedly changed the face of fantasy--something a lot of people didn't notice and maybe still don't. He brought the story down to a human level, dispensing with the cliché archetypes of princes, kings, and evil sorcerers. Reading his stuff was like reading Vietnam War fiction on peyote.” —Steven Erikson, New York Times bestselling author of the Malazan series