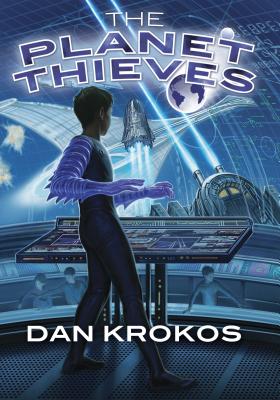 The Planet Thieves is the first thrilling installment of a new middle-grade series by Dan Krokos.

Two weeks ago, thirteen-year-old Mason Stark and seventeen of his fellow cadets from the Academy for Earth Space Command boarded the SS Egypt. The trip was supposed to be a short routine voyage to log their required spacetime for summer quarter.

But routine goes out the airlock when they're attacked by the Tremist, an alien race who have been at war with humanity for the last sixty years.

With the captain and crew dead, injured, or taken prisoner, Mason and the cadets are all that's left to warn the ESC. And soon they find out exactly why the Tremist chose this ship to attack: the Egypt is carrying a weapon that could change the war forever.

Now Mason will have to lead the cadets in a daring assault to take back the ship, rescue the survivors, and recover the weapon. Before there isn't a war left to fight.


Praise For The Planet Thieves…

“Moves at warp speed, a riveting story with characters so finely drawn that I wonder if Dan Krokos actually is an alien.” —Eoin Colfer, New York Times bestselling author of the Artemis Fowl series

“Exciting, kinetic and very visual--my favorite kind of book, a vivid movie in the reader's head, with some terrific special effects and characters to root for all the way. I'm dying to know what's next for Mason and Merrin--not to mention ESC and the sinister but complex Tremist.” —Gillian Phillip, writing as New York Times bestselling author Erin Hunter of the Survivor series

After pumping gas for nine years to put himself through college, DAN KROKOS now writes full-time. He enjoys watching TV, playing MMORPGs, and drinking coffee. His YA novel, False Memory, debuted from Hyperion in Fall 2012.  He is the author of The Planet Thieves.
Loading...
or
Not Currently Available for Direct Purchase