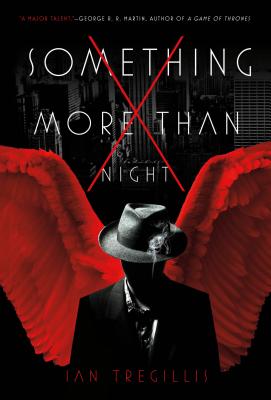 Something More Than Night

Ian Tregillis's "Something More Than Night" is a Dashiell Hammett and Raymond Chandler inspired murder mystery set in Thomas Aquinas's vision of Heaven. It's a noir detective story starring fallen angels, the heavenly choir, nightclub stigmatics, a priest with a dirty secret, a femme fatale, and the Voice of God.

Somebody has murdered the angel Gabriel. Worse, the Jericho Trumpet has gone missing, putting Heaven on the brink of a truly cosmic crisis. But the twisty plot that unfolds from the murder investigation leads to something much bigger: a con job one billion years in the making.

Because this is no mere murder. A small band of angels has decided to break out of heaven, but they need a human patsy to make their plan work.

Much of the story is told from the point of view of Bayliss, a cynical fallen angel who has modeled himself on Philip Marlowe. The yarn he spins follows the progression of a Marlowe novel the mysterious dame who needs his help, getting grilled by the bulls, finding a stiff, getting slipped a mickey.

Angels and gunsels, dames with eyes like fire, and a grand maguffin, "Something More Than Night" is a murder mystery for the cosmos.
A "Kirkus Reviews "Best Fiction Book of 2013.


Praise For Something More Than Night…

“The Coldest War is like a cross between the devious, character-driven spy fiction of early John le Carré and the mad science fantasy of the X-Men…eloquent and utterly compelling.”
—Kirkus Reviews


“An excellent journey into an alternate Britain and should please fans of Harry Turtledove and Naomi Novik.” —Library Journal on The Coldest War

IAN TREGILLIS is the author of the Milkweed Tryptich--Bitter Seeds, The Coldest War and Necessary Evil. He lives near Santa Fe, New Mexico, where he works as a physicist at Los Alamos National Laboratory. In addition, he is a member of the George R. R. Martin Wild Cards writing collective.
Loading...
or
Not Currently Available for Direct Purchase