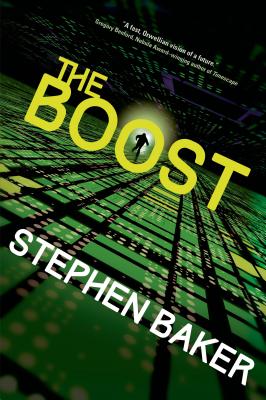 Ralf is a software prodigy. He works in the US government office that updates the software in the population's boosts networked supercomputers contained in a chip implanted within the brains of 99 percent of the world's population. Invented by Chinese researchers in 2032, the boost is credited with leading humanity to its most significant cognitive leap since the discovery of fire.

Days before a national upgrade, Ralf notices that the update includes an open surveillance gate meaning that Americans, who had negotiated high levels of privacy with the Chinese manufacturers, will now be subjected to the invasive Chinese standard. Ralf attempts to hack the boost, but is caught by agents working for Washington's preeminent lobbyist. His boost is ripped from his head, and Ralf barely escapes with his life.

Pursued by the lobbyist's mercenary cadre, Ralf flees to the US Mexico border, where there are others like him "wild" humans on the fringes of society, unenhanced by technology. It's a frightening and backward world controlled by powerful drug lords. Ralf's only hope is to somehow work with these wild bosses of the analog world in hopes of winning back freedom in the digital one.

STEPHEN BAKER was born in the Philadelphia area, graduated from the University of Wisconsin, and earned a masters in science from Columbia University Graduate School of Journalism. For ten years, Baker was a senior technology writer at BusinessWeek. He has also written for The Wall Street Journal, Los Angeles Times, and The Boston Globe. He is the author of two nonfiction books, The Numerati, and Final Jeopardy--Man vs. Machine and the Quest to Know Everything.
Loading...
or
Not Currently Available for Direct Purchase