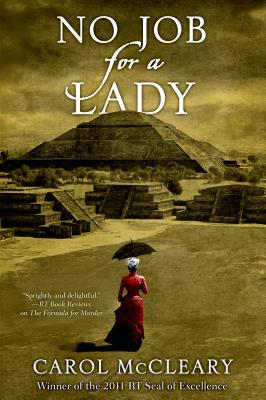 No Job for a Lady

History, mystery, and murder are the traveling companions of Nellie Bly, the world's first female investigative reporter. In Carol McCleary's No Job for a Lady, Nellie defies the wrath of her editor and vengeful ancient gods while setting out to prove a woman has what it takes to be a foreign correspondent in dangerous Victorian times.

Pyramids, dark magic, and dead bodies are what the intrepid Nellie encounters when she takes off for Mexico after her editor refuses to let her work as a foreign correspondent because "it's no job for a lady."

It's 1886 and Mexico has not cast off all its bloodthirsty Aztec past. Among the towering pyramids in the ghost city of Teotihuacán, Nellie is stalked by ruthless killers seeking Montezuma's legendary treasure and an ancient cult that resorts to the murderous Way of the Aztec to protect it.

Nellie travels with Gertrude Bell, who will go on to be called Queen of the Desert for her later exploits in Egypt, as well as the most glamorous and beautiful woman of the era, Lily Langtry, consort to the Prince of Wales. Along for the ride is a young gunfighter called the Sundance Kid. And there's the mysterious Roger Watkins, who romantically and physically challenges Nellie's determination to be an independent woman in a man's world.


Praise For No Job for a Lady…

CAROL MCCLEARY was born in Seoul, South Korea, and lived in Hong Kong, Japan, and the Philippines. She now lives on Cape Cod in an antique house that is haunted by ghosts. McCleary is the author of  Nellie Bly Mystery series.
Loading...
or
Not Currently Available for Direct Purchase