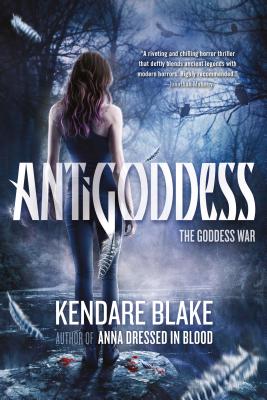 The Goddess War begins in Antigoddess, the first installment of a beautiful and dark new series by the #1 New York Times bestselling author of Three Dark Crowns and Anna Dressed in Blood

Or so Athena thought. But then the feathers started sprouting beneath her skin, invading her lungs like a strange cancer, and Hermes showed up with a fever eating away his flesh. So much for living a quiet eternity in perpetual health.

Desperately seeking the cause of their slow, miserable deaths, Athena and Hermes travel the world, gathering allies and discovering enemies both new and old. Their search leads them to Cassandra—an ordinary girl who was once an extraordinary prophetess, protected and loved by a god.

These days, Cassandra doesn't involve herself in the business of gods—in fact, she doesn't even know they exist. But she could be the key in a war that is only just beginning.

Because Hera, the queen of the gods, has aligned herself with other of the ancient Olympians, who are killing off rivals in an attempt to prolong their own lives. But these anti-gods have become corrupted in their desperation to survive, horrific caricatures of their former glory. Athena will need every advantage she can get, because immortals don't just flicker out.

Every one of them dies in their own way. Some choke on feathers. Others become monsters. All of them rage against their last breath.

The Goddess War is about to begin.


Praise For Antigoddess (The Goddess War #1)…

“Blake presents a gory, thrilling vision of the twilight of the gods, in all their pettiness and power, while letting readers draw their own messages and conclusions.” —Publishers Weekly, starred review

“This new series from one of the best up-and-coming horror/suspense writers around updates Greek mythology but offers far more than a Percy Jackson retread. Blake's spunky and imaginative narrative illuminates the personalities of the gods, especially Athena, who's gone a bit punk and is endowed with wry humor.... This edgy first installment maneuvers forces into position; readers will want to stay tuned.” —Kirkus Reviews

“The gods' world, while contemporary, is violent and laced with bizarre circumstances and powers, but Cassandra's is a normal adolescence in spite of her clairvoyance. It is Cassandra's visions that align their two worlds, creating the series debut's ultimate drama and tension, which promises to play out in subsequent Goddess War adventures.” —Booklist

“This is Kendare Blake we're talking about, so people die, and there are terrible sacrifices. It's a great start and, of course, the cliffhanger ensures that I will be impatiently waiting for the sequel.” —USA Today