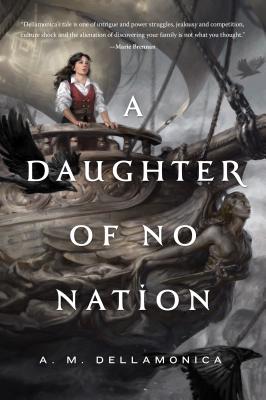 A Daughter of No Nation (Hardcover)

By A. M. Dellamonica

As soon as Sophie Hansa returned to our world, she is anxious to once again go back to Stormwrack. Unable to discuss the wondrous sights she has seen, and unable to tell anyone what happened to her in her time away, Sophie is in a holding pattern, focused entirely on her eventual chance to return.

With the sudden arrival of Garland Parrish, Sophie is once again gone. This time, she has been called back to Stormwrack in order to spend time with her father, a Duelist-Adjudicator, who is an unrivaled combatant and fearsome negotiator. But is he driven by his commitment to seeing justice prevail, or is he a sociopath? Soon, she discovers something repellent about him that makes her reject him, and everything he is offering.
Adrift again, she discovers that her time spent with her father is not without advantages, however, for Sophie has discovered there is nothing to stop her from setting up a forensic institute in Stormwrack, investigating cases that have been bogged down in the courts, sometimes for years. Her fresh look into a long-standing case between two of the islands turns up new information that could get her, and her friends, pulled into something bold and daring, which changes the entire way she approaches this strange new world. . . .

A.M. DELLAMONICA is the author of Indigo Springs, which won the Sunburst Award for Canadian Literature of the Fantastic. Her short fiction has appeared in Asimov’s, Realms of Fantasy, Sci-Fiction and Strange Horizons, and in numerous anthologies; her 2005 alternate-history Joan of Arc story, “A Key to the Illuminated Heretic,” was shortlisted for the Sideways Award and the Nebula Award. Dellamonica lives in Toronto, Ontario.
or
Not Currently Available for Direct Purchase
Copyright © 2020 American Booksellers Association