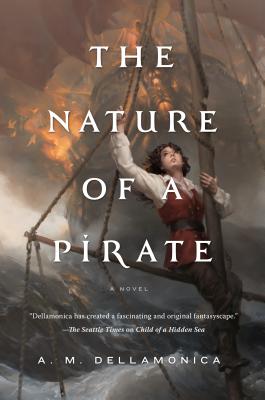 The Nature of a Pirate (Hidden Sea Tales #3)

The Nature of a Pirate is the third book in acclaimed author, A.M. Dellmonica’s high seas, Stormwrack series. The Lambda Award nominated series begins with Child of a Hidden Sea.

Marine videographer and biologist Sophie Hansa has spent the past few months putting her knowledge of science to use on the strange world of Stormwrack, solving seemingly impossible cases where no solution had been found before.

When a series of ships within the Fleet of Nations, the main governing body that rules a loose alliance of island nation states, are sunk by magical sabotage, Sophie is called on to find out why. While surveying the damage of the most recent wreck, she discovers a strange-looking creature—a fright, a wooden oddity born from a banished spell—causing chaos within the ship. The question is who would put this creature aboard and why?

The quest for answers finds Sophie magically bound to an abolitionist from Sylvanner, her father’s homeland. Now Sophie and the crew of the Nightjar must discover what makes this man so unique while outrunning magical assassins and villainous pirates, and stopping the people responsible for the attacks on the Fleet before they strike again.