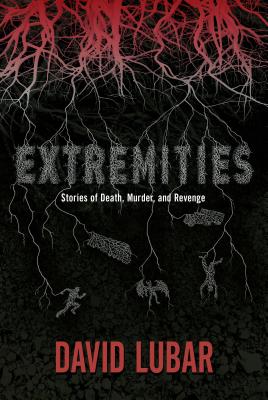 Stories of Death, Murder, and Revenge

Master of the macabre David Lubar turns his attention to dark and twisted tales for teens with Extremities: Stories of Death, Murder, and Revenge
A group of high school girls takes revenge on their sadistic gym teacher in the most fitting way possible. Two stowaways find themselves on a ship for the dead. An ancient predator stalks the wrong victim. Here are thirteen tales of death, murder, and revenge from the fertile and febrile imagination of master storyteller David Lubar—his first story collection for the teen audience.


Praise For Extremities: Stories of Death, Murder, and Revenge…

“Whoever thinks the short story is dead, or that kids don't like short stories, hasn't talked to any real live kids and hasn't read the latest in this popular series.” —School Library Journal on Attack of the Vampire Weenies

“Bullies and others get their due in this hilarious new collection of thirty-five warped and creepy tales by the master of the ‘weenie' story.” —Buffalo News on The Battle of the Red Hot Pepper Weenies

“This book will talk itself right off the shelves, and reluctant readers will devour it.” —School Library Journal on The Curse of the Campfire Weenies

David Lubar created a sensation with his debut novel, Hidden Talents, an ALA Best Book for Young Adults. Thousands of kids and educators across the country have voted Hidden Talents onto over twenty state lists. David is also the author of True Talents, the sequel to Hidden Talents; Flip, an ALA Best Book for Young Adults and a VOYA Best Science Fiction, Fantasy and Horror selection; many short story collections including In the Land of the Lawn Weenies, Invasion of the Road Weenies, The Curse of the Campfire Weenies, The Battle of the Red Hot Pepper Weenies, Attack of the Vampire Weenies, Beware the Ninja Weenies, Wipeout of the Wireless Weenies, Strikeout of the Bleacher Weenies, and Extremities; and the Nathan Abercrombie, Accidental Zombie series. Lubar grew up in Morristown, New Jersey, and he has also lived in New Brunswick, Edison and Piscataway, NJ, and Sacramento, CA. Besides writing, he has also worked as a video game programmer and designer. He now lives in Nazareth, Pennsylvania.
Loading...
or
Not Currently Available for Direct Purchase