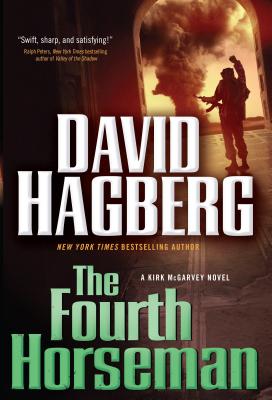 Pakistan is torn apart by riots in the streets. The CIA sends Pakistan expert David Haaris to meet with leaders of the military intelligence apparatus which all but controls the country, to try to head off what appears to be the disintegration of the government.

But Haaris has other ideas. After disguising himself, he beheads the president in front of a mob of ten thousand people and declares himself the new Messiah. He says he will bring peace and stability to the country by allying with the Taliban.

At that moment, miles to the south on the border with Afghanistan, one of four stolen nuclear weapons is detonated.

Pakistan has become the most dangerous nation in the world. Legendary former director of the CIA Kirk McGarvey is given a mission--assassinate the Messiah, code name: The Fourth Horseman.


Praise For The Fourth Horseman: A Kirk McGarvey Novel…

“David Hagberg consistently delivers thrillers that truly thrill, with an uncanny ability to anticipate future headlines. Skill, experience, knowledge and a dedication to quality long have been hallmarks of Hagberg’s novels, and The Fourth Horseman exceeds all expectations. Swift, sharp, and satisfying!” —Ralph Peters, Fox News strategic analyst and New York Times bestselling author of Valley of the Shadow

“David Hagberg is the pros' pro, the plot master we all wish we were.” —Stephen Coonts, New York Timesbestselling author of Pirate Alley

He spent more than thirty years researching and studying US-Soviet relations during the Cold War. Hagberg joined the Air Force out of high school, and during the height of the Cold War, he served as an Air Force cryptographer.