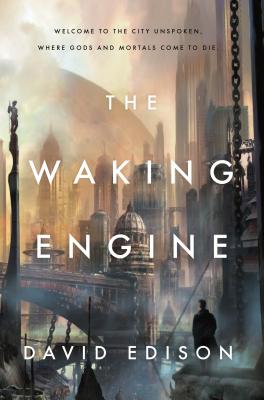 "Welcome to the City Unspoken, where Gods and Mortals come to die."
""
""Contrary to popular wisdom, death is not the end, nor is it a passage to some transcendent afterlife. Those who die merely awake as themselves on one of a million worlds, where they are fated to live until they die again, and wake up somewhere new. All are born only once, but die many times . . . until they come at last to the City Unspoken, where the gateway to True Death can be found.

Wayfarers and pilgrims are drawn to the City, which is home to murderous aristocrats, disguised gods and goddesses, a sadistic faerie princess, immortal prostitutes and queens, a captive angel, gangs of feral Death Boys and Charnel Girls . . . and one very confused New Yorker.

Late of Manhattan, Cooper finds himself in a City that is not what it once was. The gateway to True Death is failing, so that the City is becoming overrun by the Dying, who clot its byzantine streets and alleys . . . and a spreading madness threatens to engulf the entire metaverse.

Richly imaginative, David Edison's "The Waking Engine" is a stunning debut by a major new talent.

DAVID EDISON divides his time between New York City and San Francisco. The Waking Engine is his first novel.

Praise For The Waking Engine…

"This debut fantasy is a fever dream of vivid imagery and dark luscious prose, reminiscent of China Miéville in its byzantine, steampunk-influenced cityscape." —Library Journal, starred review, on The Waking Engine


"Edison breaks some new ground here, and even when he’s in familiar territory, he finds his own way of exploring it. An impressive debut." —Booklist on The Waking Engine


"Highly original, beautifully weird, deeply immersive, The Waking Engine is a storming debut and a fantasy guaranteed to trip you out." —Adam Christopher, author of Empire State and The Burning Dark on The Waking Engine

"A novel of gigantic—nay, cosmic—ideas, brought down to earth by witty characters and a delightfully clueless everyman protagonist. Universal apocalypses don’t come any bigger, or more entertaining."—Alex Bledsoe, author of The Hum and the Shiver on The Waking Engine"David Edison makes his debut with a novel of great creativity and richness. There’s nothing small about this story, from its remarkable premise to its cast of splendidly mad characters and its complex, beautifully realized world. I can’t wait for the next volume."—Delia Sherman, author of The Freedom Maze on The Waking Engine
or
Not Currently Available for Direct Purchase
Copyright © 2020 American Booksellers Association