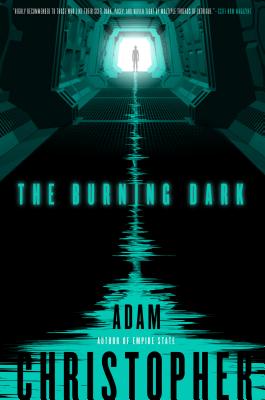 Adam Christopher's dazzling first novel, "Empire State, " was named the Best Book of 2012 by" SciFi Now" magazine. Now he explores new dimensions of time and space in "The Burning Dark."

Back in the day, Captain Abraham Idaho Cleveland had led the Fleet into battle against an implacable machine intelligence capable of devouring entire worlds. But after saving a planet, and getting a bum robot knee in the process, he finds himself relegated to one of the most remote backwaters in Fleetspace to oversee the decommissioning of a semi-deserted space station well past its use-by date.

But all is not well aboard the U-Star "Coast City." The station's reclusive Commandant is nowhere to be seen, leaving Cleveland to deal with a hostile crew on his own. Persistent malfunctions plague the station's systems while interference from a toxic purple star makes even ordinary communications problematic. Alien shadows and whispers seem to haunt the lonely corridors and airlocks, fraying the nerves of everyone aboard.

Isolated and friendless, Cleveland reaches out to the universe via an old-fashioned space radio, only to tune in to a strange, enigmatic signal: a woman's voice that seems to echo across a thousand light-years of space. But is the transmission just a random bit of static from the past or a warning of an undying menace beyond mortal comprehension?

"Builds tension expertly. Claustrophobic in mood but with the scope of great space opera, this is SF you will want to read with the light on." "Library Journal, "starred review, on "The Burning Dark.


Praise For The Burning Dark…


"Christopher has produced a widescreen Hollywood spectacular in novel form. Not to be missed."—James Lovegrove, New York Times bestselling author

"Smart, intricate, and viscerally gripping… Christopher carves a place for himself among the stars of his genre."—V.E. Schwab, author of Vicious

ADAM CHRISTOPHER is a novelist and comic writer. In 2010, as an editor, Christopher won a Sir Julius Vogel award, New Zealand's highest science fiction honor. His debut novel, Empire State, was SciFiNow's Book of the Year and a Financial Times Book of the Year for 2012. In 2013, he was nominated for the Sir Julius Vogel award for Best New Talent, with Empire State shortlisted for Best Novel. His other novels include Seven Wonders and The Age Atomic. Born in New Zealand, he has lived in the United Kingdom since 2006.
Loading...
or
Not Currently Available for Direct Purchase