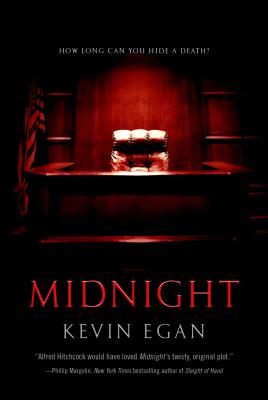 "Midnight" is a compulsively readable legal thriller by Kevin Egan that keeps tightening the screws with every page.

"How long can you hide a death?"

The New York County Courthouse, in Lower Manhattan, has its own rules and traditions. When a judge dies, the members of his staff keep their jobs until the end of that calendar year. So when Judge Alvin Canter quietly expires in his chambers on December 31st, his loyal clerk and secretary find themselves in a difficult situation. Their jobs will vanish at closing time unless they can conceal the judge's death until after midnight.

Neither Tom Carroway nor Carol Scilingo can afford to be out of work. Tom is deeply in debt to an impatient loan shark, while Carol is a struggling single mom whose young son and aging mother depend heavily on her. And both Tom and Carol have secrets they're desperate to keep hidden.

Their plan seems simple enough: make it look like the judge died at home on New Year's Day. But that's before other people get involved: a crooked union boss, a brutal mob enforcer, and Carol's suspicious ex-boyfriend. . . .

Pretty soon, Tom and Carol find themselves over their heads in an increasingly dangerous conspiracy. And if they're not very careful, more than one body may be discovered in the new year.

KEVIN EGAN, a self-described nonpracticing attorney, has spent his entire legal career working in the New York State Court system, including lengthy stints as law clerk to two State Supreme Court Justices. He now works in the iconic New York County Courthouse, which serves as the setting and inspiration for Midnight. Egan's short fiction has appeared in Alfred Hitchcock Mystery Magazine, Rosebud, and The Westchester Review.

“Slowly, methodically, excruciatingly, Egan shows his heroes’ plan spinning out of control in a classic illustration of the law of unintended consequences. A crystalline noir nightmare built on the premise that yes, things can always, always, always get worse.”—Kirkus Reviews (starred review) on Midnight

“Egan deftly parlays a simple administrative rule and the desperation of regular people into a thrilling read.”—Publishers Weekly on Midnight

“Alfred Hitchcock would have loved Midnight’s twisty, original plot. Midnight is a fast, fun read fueled by a clever premise and well-developed characters, some very likable and some really evil.”—Phillip Margolin, New York Times bestselling author of Sleight of Hand

“Midnight is the most bracingly original thriller of the year. Egan’s deliciously devious novel asks and then answers the perfect question: How far would you go to keep your job? Here is a noirish tale layered with both style and substance, packed with colorful characters who give a new meaning to the word sinister. Great fun that is not to be missed!”—Jon Land, bestselling author

“My favorite noir-infused books take ordinary people and put them in extraordinary circumstances, where one false move can prove deadly. That’s exactly what Kevin Egan does with his thrilling novel Midnight. Forget sleep—this twisted tale will get your heart pounding right up until the last page.”—Hilary Davidson, Anthony Award–winning author of Evil in all its Disguises