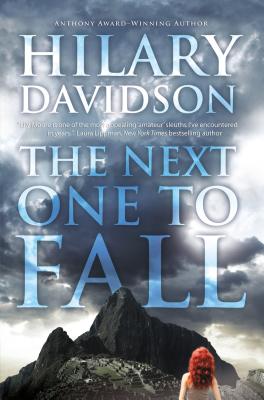 Anthony Award-winner Hilary Davidson presents "The Next One to Fall."

Travel writer Lily Moore has been persuaded by her closest friend, photographer Jesse Robb, to visit Peru with him. Jesse is convinced that the trip will lure Lily out of her dark mood, but Lily is still haunted by the death of her sister. At Machu Picchu, the famous Lost City of the Incas, they discover a woman clinging to life at the bottom of an ancient stone staircase. Just before the woman dies, she tells Lily the name of the man who pushed her.

“Davidson has already achieved a remarkable fusion of mainstream mystery with a dark streak a mile wide. Her voice is a fresh and welcome addition to the noir landscape.”
—Los Angeles Review of Books


“Exciting. The rich history and geography of Peru add depth to an engrossing mystery that constantly keeps the reader guessing.”
—Publishers Weekly

“Will leave you breathless, and not just because of the Andes’ high altitude. Her determined young travel writer propels the exciting plot like a rocket.”
—Library Journal

“Davidson’s rendering of Machu Picchu and Cusco would merit a pisco sour toast even from the great Jan Morris.”
—Kirkus Reviews

HILARY DAVIDSON won the Anthony Award for Best First Novel for The Damage Done. That book also earned a Crimespree Award and was a finalist for the Arthur Ellis and Macavity awards. Davidson's widely acclaimed short stories have been featured in publications from Ellery Queen to Thuglit, and in many anthologies. A Toronto-born travel journalist and the author of eighteen nonfiction books, she has lived in New York City since October 2001.
Loading...
or
Not Currently Available for Direct Purchase