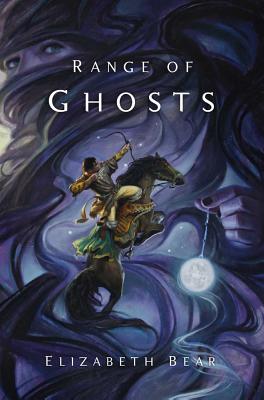 Range of Ghosts (The Eternal Sky #1)

A powerful new fantasy from Hugo award–winning author Elizabeth Bear, Range of Ghosts creates a world both deep and broad, where a sorcerer-prince seeks world domination for the glory of his God.

Temur, grandson of the Great Khan, is walking from a battlefield where he was left for dead. All around lie the fallen armies of his cousin and his brother who made war to rule the Khaganate. Temur is now the legitimate heir by blood to his grandfather's throne, but he is not the strongest. Going into exile is the only way to survive his ruthless cousin.

Once-Princess Samarkar is climbing the thousand steps of the Citadel of the Wizards of Tsarepheth. She was heir to the Rasan Empire until her father got a son on a new wife. Then she was sent to be the wife of a Prince in Song, but that marriage ended in battle and blood. Now she has renounced her worldly power to seek the magical power of the wizards.

These two will come together to stand against the hidden cult that has so carefully brought all the empires of the Celadon Highway to strife and civil war through guile and deceit and sorcerous power.


Praise For Range of Ghosts (The Eternal Sky #1)…

“This lean, sinewy, visceral narrative, set forth in extraordinarily vivid prose full of telling detail, conveys a remarkable sense of time and place, where the characters belong to the landscape and whose personalities derive naturally from it.” —Kirkus Reviews, starred review

“Elizabeth Bear launches a trilogy in a fantastic new world with this compelling tale…Bear creates a vivid world where wizards must sacrifice their ability to procreate in order to control magic and the sky changes to reflect the gods of the land's rulers. The strong setting and engaging characters will have readers eager for the second installment.” —Publishers Weekly