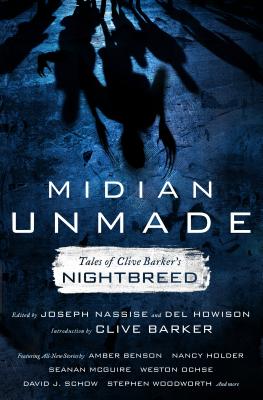 Clive Barker's Nightbreed has been controversial since the moment it was released in a version edited by the studio and roundly condemned by Barker, who wrote and directed the movie. A virtually instant cult film based on Barker's novella Cabal, it was nominated for three Saturn Awards and won several prizes at European film festivals.

Midian Unmade tells the stories of the Nightbreed after the fall of their city, Midian. Driven from their homes, their friends and family members slain before their eyes, the monsters become a mostly-hidden diaspora. Some are hunted; others, hunters. Some seek refuge. Others want revenge.

With an introduction by Clive Barker, this is an outstanding collection of original horror short stories in a dazzling variety of styles.

JOSEPH NASSISE is the author of Eyes to See. He has been nominated for the Bram Stoker Award and the International Horror Guild Award. He currently lives in Arizona with his wife and four children.

Del Howison is a journalist, writer, and the Bram Stoker Award-winning editor of Dark Delicacies: Original Tales of Terror and the Macabre by the World's Greatest Horror Writers. He is the cofounder and owner of Dark Delicacies, a bookstore known as "The Home of Horror," located in Burbank, California.

Clive Barker is the best-selling author of more than twenty novels and collections of short stories that range from horror to fantasy. He has had much success in film, directing Hellraiser and Nightbreed.

"With so much imagination and love for the mythology on display, Midian Unmade is recommended reading for those who love the creatures of the night. It’s also proof that every monster has its day.”—Rue Morgue

"Rich and rewarding. Fans of Clive Barker, or of good dark fiction in general, will want to be sure to add this to their shelves.”—October Country

“I was never bored with a single story...this is a fantastic collection. [The] avid genre fan...will find references to Ray Bradbury, Richard Matheson, and others. This is a must own.”—Horror Underground

“It is completely unfair that Midian Unmade: Tales of Clive Barker's Nightbreed is so wonderfully and captivatingly written, only to end like all good books must. The stories contained therein are so intoxicating, so lovingly written, and so all-encompassing that they leave you aching for more ”—Horror Talk

“Wonderful...a must-read. Offer[s] a unique take on the mysterious world of the Nightbreed, and the heartbreak and despair that can be felt by anyone, including monsters.”—Wicked Horror