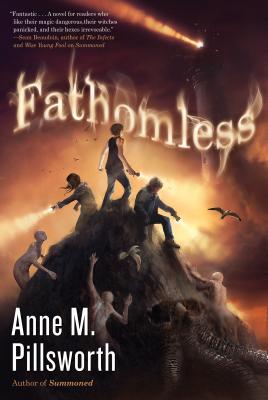 In Anne M. Pillsworth's Fathomless, Sean dips even further into his magical destiny, but will blood prove thicker than the mysteries of Innsmouth's briny depths?

Sean Wyndham has tried to stay away from the lure of magic-the last time he tried to dabble in the dark studies, he inadvertently summoned a blood familiar, wreaking havoc on his town, and calling the attention of the Elder Gods. But now Sean has been offered the chance to study magic with a proper teacher, overseen by Helen Arkwright, a friend of Sean's father and heir to ancient order of much power, who protects New England from that which lurks in the coastline's unseen depths. But will learning theory be enough, when there is a much greater magical secret hidden in Helen's vaulted library?

Accompanied by his best friend, Eddy, and their enigmatic new friend Daniel, Sean wades out deeper into mystical legend and shadow. With hints and secrets buried long in family lore, they turn to the suspicious Reverend Orne once more for assistance. But as Sean deepens his understanding of his power, a darkness is waking...

“A well-executed sequel that expands the mythos, solidifies the characters, and raises the stakes for the next outing.” - Kirkus Reviews