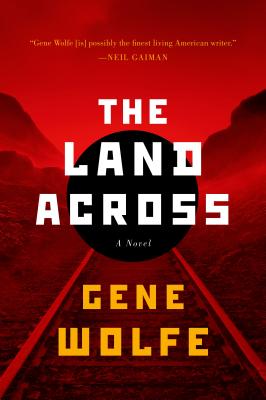 An American writer of travel guides in need of a new location chooses to travel to a small and obscure Eastern European country. The moment Grafton crosses the border he is in trouble, much more than he could have imagined. His passport is taken by guards, and then he is detained for not having it. He is released into the custody of a family, but is again detained. It becomes evident that there are supernatural agencies at work, but they are not in some ways as threatening as the brute forces of bureaucracy and corruption in that country. Is our hero in fact a spy for the CIA? Or is he an innocent citizen caught in a Kafkaesque trap?

In "The Land Across, "Gene Wolfe keeps us guessing until the very end, and after.

Gene Wolfe is one of the most admired and respected living writers of SF and fantasy. He is the author of The Fifth Head of Cerberus, the bestselling The Book of the New Sun tetralogy, as well as among many others including Soldier of the Mist, The Sorcerer's House, Home Fires, The Knight, The Wizard, Peace, and The Book of the Long Sun. He is also a prolific writer of distinguished short fiction, which is collected in many volumes over the last four decades, most recently in The Best of Gene Wolfe. He received the World Fantasy Award for Life Achievement, the Edward E. Smith Memorial Award, and multiple Nebula and Locus awards, among other honors. In 2007, he was inducted into the Science Fiction Hall of Fame. In 2012, he was awarded the Science Fiction and Fantasy Writers of America Grand Master Award. He lives in Barrington, Illinois.