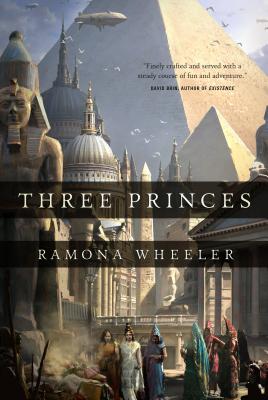 Lord Scott Oken, a prince of Albion, and Professor-Prince Mikel Mabruke live in a world where the sun never set on the Egyptian Empire. In the year 1877 of Our Lord Julius Caesar, Pharaoh Djoser-George governs a sprawling realm that spans Europe, Africa, and much of Asia. When the European terrorist Otto von Bismarck touches off an international conspiracy, Scott and Mik are charged with exposing the plot against the Empire.

Their adventure takes them from the sands of Memphis to a lush New World, home of the Incan Tawantinsuyu, a rival empire across the glittering Atlantic Ocean. Encompassing Quetzal airships, operas, blood sacrifice and high diplomacy, Ramona Wheeler's Three Princes is a richly imagined, cinematic vision of a modern Egyptian Empire.

RAMONA LOUISE WHEELER is the author of the "Ray and Rokey" series appearing in Analog magazine and Three Princes.