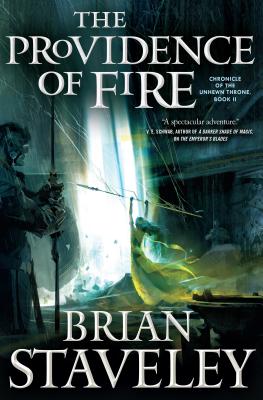 The Providence of Fire is the second novel in Brian Staveley's Chronicle of the Unhewn Throne, a gripping new epic fantasy series

Unknown to Adare, her brother Valyn, a renegade member of the empire's most elite fighting force, has allied with the invading nomads. The terrible choices each of them has made may make war between them inevitable.

“Epic adventure that ratchets up the action and muddies the waters, all while completely throwing all expectations out the window....We can't wait to see what happens next.” —io9

“Book Two finishes on a knife-edge and where it goes from here is anyone's guess.” —Fantasy Faction

“It's rare that a book comes along and blows my frigging mind. It's even rarer when an author can pull this off not once, but twice. Brian Staveley pulled this off. Hard.” —Lit Chick Hit List

“Superbly written, sublimely enchanting, utterly engrossing, grabs-you-by-the-throat-and-refuses-to-let-go, and then you're a shell of a person once you're finished. Brian Staveley is not only an invaluable new voice to the epic fantasy genre, and the literary world at large, but he's on his way to being one of the greats.” —The Book Geek