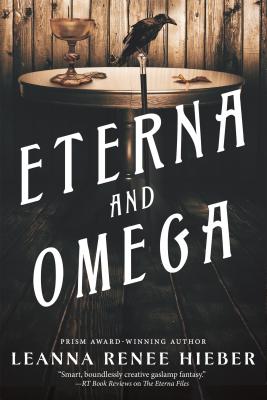 Leanna Renee Hieber's gaslamp fantasy series continues and the action ramps up in Eterna and Omega.

In New York City, fearing the dangers of the Eterna Compound--supposedly the key to immortality--Clara Templeton buries information vital to its creation. The ghost of her clandestine lover is desperate to tell her she is wrong, but though she is a clairvoyant, she cannot hear him.

In London, Harold Spire plans to send his team of assassins, magicians, mediums, and other rogue talents to New York City, in an attempt to obtain Eterna for Her Royal Majesty, Queen Victoria. He stays behind to help Scotland Yard track down a network of body snatchers and occultists, but he'll miss his second-in-command, Rose Everhart, whose gentle exterior masks a steel spine.

Rose's skepticism about the supernatural has been shattered since she joined Spire's Omega Branch. Meeting Clara is like looking into a strange mirror: both women are orphans, each is concealing a paranormal ability, and each has a powerful and attractive guardian who has secrets of his own.

The hidden occult power that menaces both England and America continues to grow. Far from being dangerous, Eterna may hold the key to humanity's salvation.