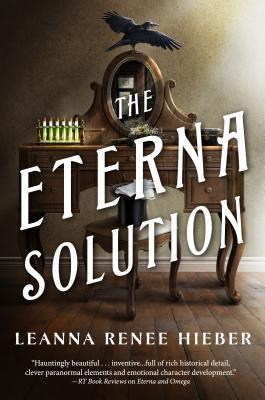 It’s 1882 and two government divisions of paranormal investigators have completed a most harrowing task—stopping a demonic nobleman from taking over the British Parliament. Now the motley crew of psychics, scientists, scholars, and magicians must race across the ocean to Manhattan to protect it from evil forces they believe Moriel unleashed.

American Clara Templeton’s psychic powers have grown exponentially but she worries that defeating the sinister forces arrayed against them will cost her her life. Londoner Harold Spire, once a Scotland Yard detective, has had just about enough of the occult, though he has seen his team’s supernatural powers at work. Together, the American Eterna Commission and the British Omega Department hope to save New York City without destroying themselves.

Praise for the Eterna Files series

“There’s a little of bit of everything in this series, from romance to action to incredibly gruesome and horrifying dinner parties. This is the Gothic, after all.”—Criminal Element

“Authentic Victorian atmosphere and colorful personalities that will keep readers coming back for more.”—Publishers Weekly on The Eterna Files

“Adeptly engages with important issues like equality for women, as well as for people of all races, sexual orientations, and religions, and shows how these issues fit into a Victorian context. I certainly recommend that you checkout Eterna and Omega, along with any of Leanna’s other works.”—The Gothic Library

“The ghosts, spirits, and other mysterious beings that make an appearance in the novel often prove truly spooky, just as they should in a good ghost story. Readers who enjoy a skillful mixture of history and paranormal elements will be well-pleased with the terrific The Eterna Files.”—Bitten By Books

“Rich in conceits as anything from Alan Moore, Hieber’s novel mixes action and the emotional lives of its characters into a fascinating stew.”—Paul Di Filippo, Asimov’s Science Fiction, on The Eterna Files

“Heightens the tension and sharpens the points of contradiction for an age on the cusp of change.”—Locus on Eterna and Omega

“Hieber creates an intriguing supernatural underworld, with the late 19th century providing an engaging backdrop for scandals and dangers. [An] entertaining series.”—Publishers Weekly on Eterna and Omega

“Hieber’s formidable imagination is given free rein in this smart, boundlessly creative gaslamp fantasy. She blends historical fact and paranormal fiction with ease, creating a world that is lush and fascinatingly strange, and reveals her secrets sparingly, keeping fans on edge.”—RT Book Reviews on The Eterna Files

“A rainbow of characters, from the guilt-ridden to the intellectual to the satirical, which will have readers chomping at the bit for more.”—Suspense Magazine on The Eterna Files