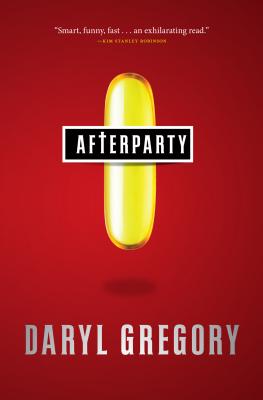 It begins in Toronto, in the years after the smart drug revolution. Any high school student with a chemjet and internet connection can download recipes and print drugs, or invent them. A seventeen-year-old street girl finds God through a new brain-altering drug called Numinous, used as a sacrament by a new Church that preys on the underclass. But she is arrested and put into detention, and without the drug, commits suicide.

Lyda Rose, another patient in that detention facility, has a dark secret: she was one of the original scientists who developed the drug. With the help of an ex-government agent and an imaginary, drug-induced doctor, Lyda sets out to find the other three survivors of the five who made the Numinous in a quest to set things right.

A mind-bending and violent chase across Canada and the US, Daryl Gregory's Afterparty is a last chance to save civilization, or die trying.

“A quietly brilliant second novel. . . . A wide variety of believable characters, a well-developed sense of place and some fascinating scientific speculation will earn this understated novel an appreciative audience among fans of literary SF.” —Publishers Weekly, starred review, on The Devil's Alphabet

Daryl Gregory was the 2009 winner of IAFA William L. Crawford Fantasy Award for his first novel Pandemonium. His second novel, The Devil's Alphabet, was nominated for the Philip K. Dick Award and was named one of the best books of 2009 by Publishers Weekly. His short fiction has appeared in The Magazine of Fantasy and Science Fiction, Asimov’s Science Fiction Magazine, and The Year’s Best SF. He has also written comics for BOOM! Studios and IDW.
Loading...
or support indie stores by buying on
(This book is on backorder)