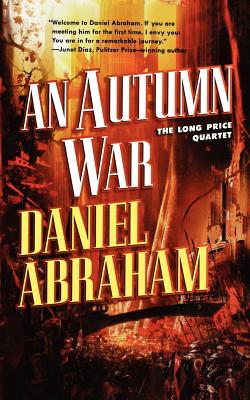 Daniel Abraham delighted fantasy readers with his brilliantly original and engaging first novel, and in his second penned a tragedy as darkly personal and violent as Shakespeare's King Lear. Now he has written an epic fantasy of much wider scope and appeal that will thrill his fans and enthrall legions of new readers.


Praise For An Autumn War: The Long Price Quartet…

“A Betrayal in Winter is exactly the kind of book I love: dynamic characters, sharp plotting, and an original, thoughtful take on magic.” —Brandon Sanderson, author of Mistborn

Daniel Abraham has had stories published in the Vanishing Acts, Bones of the World, and The Dark anthologies, and has also been included in Gardner Dozois's Year's Best Science Fiction anthology.  He won the International Horror Writers Association award for best short fiction for his story “Flat Diane.” His books include The Long Price Quartet, starting with A Shadow in Summer. He lives in New Mexico with his wife and daughter.
Loading...
or support indie stores by buying on