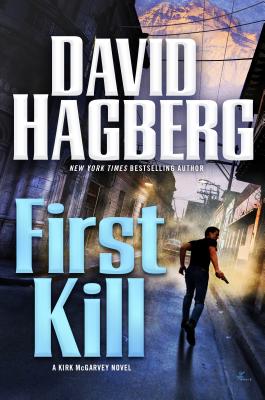 It is the beginning of Kirk McGarvey's career as a CIA black ops officer. Fresh out of the Air Force OSI, he receives his first assignment: assassinate a Chilean general known as the Butcher of Valparaiso, a monster who has tortured and killed more than one thousand dissidents at a soccer stadium in Valparaiso.

McGarvey manages to cross the border over the mountains from Argentina without being discovered, and even makes his way to the general's remote compound. But the odds are stacked against him. Chile's National Intelligence Agency, the ANI, has been warned of his approach and wants him to fail—and someone back home in Washington is working to make sure he does.

For this newly-minted assassin, killing the butcher is only the beginning.

David Hagberg (1947-2019) was a New York Times bestselling author who published numerous novels of suspense, including his bestselling thrillers featuring former CIA director Kirk McGarvey, which include Abyss, The Cabal, The Expediter, and Allah’s Scorpion. He earned a nomination for the American Book Award, three nominations for the Mystery Writers of America Edgar Allan Poe Award and three Mystery Scene Best American Mystery awards. He spent more than thirty years researching and studying US-Soviet relations during the Cold War. Hagberg joined the Air Force out of high school, and during the height of the Cold War, he served as an Air Force cryptographer.

“Hagberg’s books should be required reading in Washington.”
—Stephen Coonts, New York Times bestselling author of The Art of War

“Hagberg edges out Tom Clancy for commander of our uniquely American, military based thrillers and espionage novels: high-concept plot, non-stop action, insider knowledge of how things work out there in our complicated, high-combat world.”
—James Grady, New York Times bestselling author of Last Days of the Condor

“Hagberg consistently delivers thrillers that truly thrill, with an uncanny ability to anticipate future headlines. Skill, experience, knowledge and a dedication to quality long have been hallmarks of his novels.”
—Ralph Peters, New York Times bestselling author of Judgment at Appomattox