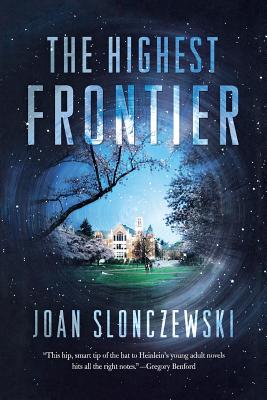 One of the most respected writers of hard SF, it has been more than ten years since Joan Slonczewski's last novel. Now she returns with a spectacular tour de force of the college of the future, in orbit. Jennifer Ramos Kennedy, a girl from a rich and politically influential family (a distant relation descended from the famous Kennedy clan), whose twin brother has died in an accident and left her bereft, is about to enter her freshman year at Frontera College.

Frontera is an exciting school built with media money, and a bit from tribal casinos too, dedicated to educating the best and brightest of this future world. We accompany Jenny as she proceeds through her early days at school, encountering surprises and wonders and some unpleasant problems. The Earth is altered by global warming, and an invasive alien species called ultraphytes threatens the surviving ecosystem. Jenny is being raised for great things, but while she's in school she just wants to do her homework, go on a few dates, and get by. The world that Jenny is living in is one of the most fascinating and creative in contemporary SF, and the problems Jenny faces will involve every reader, young and old.


Praise For The Highest Frontier…

“Filled with intellectual and emotional fireworks.” —The New York Times on The Children Star

“A story that is not only exciting but also filled with memorable characters: human, alien and sentient machine.” —Publishers Weekly (starred review) on Joan Slonczewski

Joan Slonczewski is the author of The Highest Frontier, The Children Star, and A Door Into Ocean. She lives in Gambier, Ohio and teaches biology at Kenyon College.