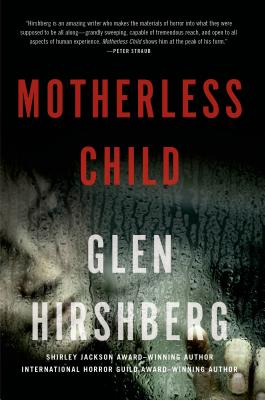 In his powerful novel, Motherless Child, Bram Stoker Award-nominee Glen Hirshberg, author of the International Horror Guild Award-winning American Morons, exposes the fallacy of the Twilight-style romantic vampire while capturing the heart of every reader.

It's the thrill of a lifetime when Sophie and Natalie, single mothers living in a trailer park in North Carolina, meet their idol, the mysterious musician known only as "the Whistler." Morning finds them covered with dried blood, their clothing shredded and their memories hazy. Things soon become horrifyingly clear: the Whistler is a vampire and Natalie and Sophie are his latest victims. The young women leave their babies with Natalie's mother and hit the road, determined not to give in to their unnatural desires.

Hunger and desire make a powerful couple. So do the Whistler and his Mother, who are searching for Sophie and Natalie with the help of Twitter and the musician's many fans. The violent, emotionally moving showdown between two who should be victims and two who should be monsters will leave readers gasping in fear and delight.

Originally published in a sold-out, limited edition, Motherless Child is an extraordinary Southern horror novel that Tor Books is proud to bring to a wider audience.

GLEN HIRSHBERG received his B.A. from Columbia University, where he won the Bennett Cerf Prize for Best Fiction, and his M.A. and M.F.A. from the University of Montana. His first novel, The Snowman’s Children, was a Literary Guild Featured Selection. His collection, The Two Sams, won three International Horror Guild Awards and was named a Best Book of the Year by Publishers Weekly. Hirshberg has won the Shirley Jackson Award and been a finalist for the World Fantasy and the Bram Stoker Awards.

“Glen Hirshberg is an amazing writer who makes the materials of horror into what they were supposed to be all along--grandly sweeping, capable of tremendous reach, and open to all aspects of human experience. Motherless Child shows him at the peak of his form.” —Peter Straub

“A subversive, thrilling novel that subverts everything we've come to expect from tales that traffic in the undead, Motherless Child is as heartbreaking as it is terrifying, a breakneck midnight ride through a part of America too seldom visited in fiction. It's Glen Hirshberg as his best, and I can offer no higher praise than that.” —Elizabeth Hand, author of Generation Loss

“A compelling tale of the supernatural that gives it a human face. Beautifully written, it reinvents one of the inconic monsters in ways that are both classical and up to the minute. It's a virtuoso display of Glen Hirshberg's considerable talents, ranging from uncanny poetry to breathless suspense, and its monstrous situation is explored in great and moving depth. We can be sure horror fiction is still vital when it's reimagined as freshly and vigorously as this.” —Ramsey Campbell, author of Ghosts Know and The Darkest Part of the Woods

“Always one of his generation's finest stylists, its most able students of character, [Hirshberg] has written one of the best books of the year.” —The Los Angeles Review of Books

“Hirshberg's adept characterization engages the reader's sympathies for Natalie and Sophie as they fight the pangs of vampiric hunger and yearn for their absent children. His depiction of Jess in her dogged, self-sacrificial adherence to Natalie's request evokes Faulknerian depth. The clash of human and vampire worlds in the tumultuous final showdown presents a satisfying, startling conclusion and infuses this work with both literary and genre merit.” —Publishers Weekly (starred review)

“A superbly gritty and intense novel that neither knows nor cares about genres, literary or vampire. Hirshberg is the sort of author who brings an authentic voice of the sort of people you might know, caught up in circumstances beyond our imaginations, to the printed page. The reader will be gripped with the white-hot fury of Hirshberg's ability to write great prose, great characters, and great sleaze in a novel that makes you feel. He writes as if possessed by a falling angel.” —Rick Kleffel, The Agony Column

“A heartbreaking exploration of friendship, motherhood, love, loss, and loyalty. Motherless Child is a staggeringly good novel, and if I had any complaint, it's that it ended too soon. Highly recommended.” —Horrorworld

“This is a deep novel, a novel that makes you think, but at the same time, it's a fun novel…that makes you feel. For fans of Hirshberg, this is one more masterpiece to add to your collection; for everyone else, this is an introduction to a horror writer who is one of the best working today and possibly one of the best ever.” —Nameless