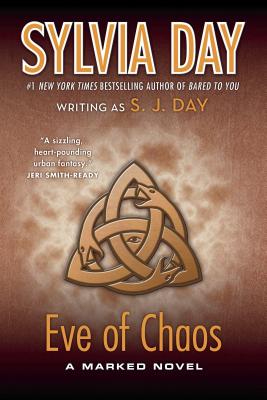 When Evangeline Hollis spent a night of passion with the darkly seductive Alec Cain, she had no idea that she'd be punished for it years later. Branded with the Mark of Cain, Eve was thrust into a life of hunting demons as penance.

Living with the Mark—and the two sexy brothers who come with it—was trouble enough. But then Eve ran over Satan's hellhound during training. Now Satan, incensed at the loss of his pet, has put a bounty on Eve's head, and every demon in the country wants to be the one to deliver her.

Meanwhile, Eve's formerly insatiable one-night stand is acting distant. Cain says he still wants Eve, and she believes him, but scorching hot sex isn't enough. Not after knowing what it was like to have more.


Praise For Eve of Chaos: A Marked Novel (Marked Series #3)…

“A sizzling, heart-pounding urban fantasy that thrilled and fascinated me from beginning to end. It's got smokin' hot angels, blood-chilling demons, and questions that go deeper than who's kicking whose butt.” —Jeri Smith-Ready, New York Times bestselling author

Sylvia Day is the #1 New York Times and #1 international bestselling author of over twenty award-winning novels sold in more than 40 countries, including (under the pen name S. J. Day) The Marked Trilogy. Day is a #1 bestselling author in 28 countries, with tens of millions of copies of her books in print. Her Crossfire series has been optioned for television by Lionsgate. She has won the RT Book Reviews Reviewers’ Choice Award and been nominated for Romance Writers of America's prestigious RITA award twice.

S.J. DAY's resume includes a variety of odd jobs ranging from amusement park employee to POW interrogator. She is presently a full-time writer whose award-winning and international bestselling books include The Marked Trilogy and, under the pen name Sylvia Day, the Crossfire series; paranormal, historical, and futuristic fiction; and several nonfiction books.
Loading...
or
Not Currently Available for Direct Purchase