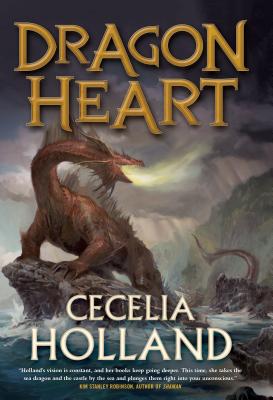 In Dragon Heart, Cecelia Holland, America's most distinguished historical novelist steps fully into the realm of fantasy and makes it her own.

Where the Cape of the Winds juts into the endless sea, there is Castle Ocean, and therein dwells the royal family that has ruled it from time immemorial. But an eastern Empire has risen, and its forces have reached the castle. King Reymarro is dead in battle, and by the new treaty, Queen Marioza must marry one of the Emperor's brothers. While Marioza delays, her youngest son, Jeon, goes on a journey in search of his mute twin, Tirza, who needs to be present for the wedding.

As Jeon and Tirza return by sea, their ship is attacked by a powerful dragon, red as blood and big as the ship. Thrown into the water, Tirza clings to the dragon, and after an underwater journey, finds herself alone with the creature in an inland sea pool. Surprisingly, she is able to talk to the beast, and understand it.

So begins a saga of violence, destruction, and death, of love and monsters, human and otherwise.

“In a lesser author's hands, this would all be so much epic-fantasy boilerplate. But Holland imbues her tale with an elemental, archetypal magnificence that's heightened even further by her lush, Gothic atmosphere and mystique. Her sentences are exquisite, and she renders scenes of sex and death with poetic, visceral power.” —NPR

“Holland revisits the enthralling saga of Corban Loosestrife in this equally engaging sequel to The Soul Thief.Holland interweaves elements of romance, magic, and suspense into a superlative historical epic featuring a stoic hero often at odds with the all-powerful Viking warriors.” —Booklist on The Witches' Kitchen

Cecelia Holland is widely acknowledged as one of the finest historical novelists of our time. She is the author of more than thirty novels, including The Angel and the Sword and The Kings in Winter. Holland lives in Humboldt County, in northern California, where she teaches creative writing, and is currently at work on a new historical novel.
Loading...
or
Not Currently Available for Direct Purchase