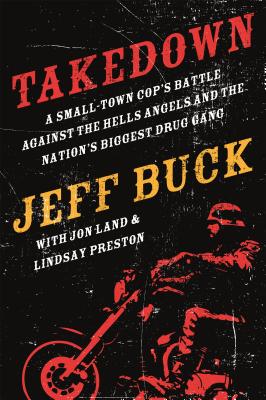 Takedown is the story of heroic undercover cop Jeff Buck's battle with Hells Angels and drug-smugglers on the American border with help from Jon Land and Lindsay Preston.

Twenty years working undercover in the netherworld of drugs had left Jeff Buck burned out and grateful to assume the quiet job of police chief in the small town of Reminderville, Ohio. That is, until a simple domestic assault case turns out to have links to the murder of a drug runner in upstate New York and a syndicate smuggling billions of dollars in drugs across the U.S.-Canada border.

Buck uncovers a complex chain linking the Hells Angels to the Russian Mafia in a plot to use Native American tribal land to smuggle their deadly wares into the United States. From grow houses set ablaze in Quebec to the insular St. Regis Mohawk Indian Reservation, from board rooms and biker wars to the frozen rivers that serve as private turnpikes for the drug gangs, Buck opposes a serpentine criminal enterprise that has every reason to want to end his crusade in violence and bloodshed.

Ultimately, his efforts lead to an unprecedented slew of indictments on both sides of the border and prison terms for even the kingpins, toppling an empire once deemed invincible. Takedown spans the period of December 2007 to June 2009.

JEFF BUCK spent over twenty years working as an undercover drug officer. Involved in some of the biggest drug busts of the past generation, he worked in over a dozen states as well as several countries. Along the way he earned a reputation for helping to write the rules on building inter-agency task forces and helped take down some of the nation's most notorious drug kingpins. He is a lifelong resident of Ohio and currently serves there as chief of police of Reminderville. Takedown: A Small-Town Cop's Battle Against the Hells Angels and the Nation's Biggest Drug Gang is his true autobiographical account of his latter career.

LINDSAY PRESTON has written numerous nonfiction works for some of the most prominent figures in the world of finance, law and sports. She is the creator of Writingroom.com, forging a community for writers that won first place in Northeast Ohio Software Association's "Best of Tech Awards" for best new website in 2009. Lindsay has also written numerous music video treatments for the production company, Additive Interactive, whose clients include PDiddy, Chamillionaire and Timbaland. She lives in the Cleveland, Ohio area with her young daughter.

Praise For Takedown: A Small-Town Cop's Battle Against the Hells Angels and the Nation's Biggest Drug Gang…

“True crime doesn't get any more thrilling than this! [A] gripping tale of suspense and a quest for justice." —Linda Fairstein

“If you loved Narcos and Sons of Anarchy, then you’ll love this authoritative, real-life account of the war on drugs.” —New York Journal of Books

“Both fascinating and compelling . . . For those who enjoy good cop stories, this is a good one.” —Manhattan Book Review