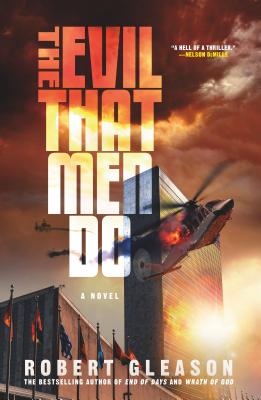 The Evil That Men Do

Robert Gleason brings his A-game to The Evil That Men Do, a terrorism thriller steeped with equal parts terror and wit

Income inequality and the offshore hoarding of illicit black funds have reached such extremes that the earth’s democracies are in peril. The oligarchs are taking over. The People worldwide, however, are rising up, and they demand that the UN seize and redistribute all that illegal filthy lucre. But it will not be easy. The world’s oligarchs will not go gentle.

Mikhail Putilov, Russia’s strongman; J. T. Tower, the American president, and Wahid al-Waheed, the Saudi Ambassador to the US will do anything to stop and destroy this global expropriation moment—even if it means nuking the UN. Only three people can stop them: the crusading, muckraking, investigative journalist, Jules Meredith; ex-CIA agent, Elena Moreno; and her boyfriend, the ex-Special Forces Operative turned cybersecurity billionaire, John C. Jameson. If these three fail, democracies around the world will die; and the Age of the Great Global Oligarchs will begin.

If these the three friends fail, the nuclear fireballs will blaze, the UN will burn, and a New Dark Ages will ensue. People everywhere must hold their breath and wait.


Praise For The Evil That Men Do…

“The Evil That Men Do is a roiling, in-your-face thriller . . . all narrated in a fiery prose that eagerly details love scenes, torture scenes, and the explosive finale. Enjoy the action.” —Booklist

“Like always, Gleason stays ahead of the pack, firing on all cylinders, with a take-no-prisoners attitude. This one isn’t inspired by the headlines, it is the headlines.” —Steve Berry, New York Times bestselling author

“As bold a book as you'll find this year. Gleason writes with tremendous energy, flair and velocity of the plot. With its devilish characterizations and insider savvy, this novel competes easily with the most vivid headlines of our time. A lion's roar of a book!” —Ralph Peters, three-time winner of the Boyd Award and the New York Times bestselling author of Judgment at Appomattox

“A nerve-fraying, throat-clutching, keep-you-up-all-night thriller, it is a work of fiction forged in hell!” —William Cohen, former US Defense Secretary and New York Times bestselling author of Final Strike

"Robert Gleason is a legend among thriller writers and fans, and The Evil That Men Do is an outrageous tour-de-force." —James Grady, New York Times bestselling author of Six Days of the Condor