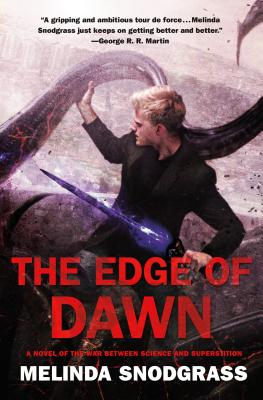 The Edge of Dawn

What do you do when the Earth is under assault from monstrous creatures by alternate dimensions and you're the only person who can wield the weapon that can destroy them? That's the situation facing Richard Oort, hero of the Melinda Snodgrass's Edge of Dawn.

Lonely and overwhelmed after a series of terrifying, catastrophic global and personal events, Richard is still determined to save the world from the horrific Old Ones. He goes undercover in a Christian fundamentalist compound, playing house with an attractive FBI agent. At first, this only serves to increase his loneliness, missing his real family, but against all odds discovers another unique human who can use the paladin's weapon, one who might be able to join him and lighten the burden of responsibility. There's only one problem - Mosi is a nine year old Navajo girl.

Their enemies are trying to kill both Richard and Mosi-and have already killed Mosi's family. To keep her safe Richard becomes her guardian, but an error in judgement leads to disaster and betrayal, and now the odd pair will need to summon all their strength to survive the coming battle. From the American southwest to a secret society in Turkey, the paladin and his ward try to stay in front of their enemies, but the world is at stake-and time is running short.


Praise For The Edge of Dawn…

Melinda Snodgrass was a story editor and executive script consultant on Star Trek: The Next Generation. Her acclaimed episode, "The Measure of a Man," was nominated for the Writer's Guild Award for outstanding writing in a drama series. With George R. R. Martin, she cocreated the popular Wild Cards series of shared-world novels and anthologies. She lives in New Mexico.
Loading...
or
Not Currently Available for Direct Purchase