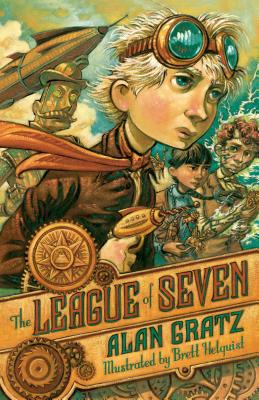 The League of Seven

The League of Seven is the first book in an action-packed, steampunk series by the acclaimed author of Samurai Shortstop, Alan Gratz.

In an alternate 1875 America electricity is forbidden, Native Americans and Yankees are united, and eldritch evil lurks in the shadows. Young Archie Dent knows there really are monsters in the world. His parents are members of the Septemberist Society, whose job it is to protect humanity from hideous giants called the Mangleborn. Trapped in underground prisons for a thousand years, the giant monsters have been all but forgotten—but now they are rising again as the steam-driven America of 1875 rediscovers electricity, the lifeblood of the Mangleborn. When his parents and the rest of the Septemberists are brainwashed by one of the evil creatures, Archie must assemble a team of seven young heroes to save the world.


Praise For The League of Seven…

“The League of Seven is amazingly interesting, unique, and captivating. From the steam-powered, clockwork-run 1870s setting to the persistent protagonist to the fresh takes on important historical events and figures, the novel is hard to put down. Although it is written for a middle school audience, it also provides a clean, fast-paced romp for older students who do not mind an easy read.” —VOYA 5Q, 4P M J

“An enticing alternate history presents an America in which Native tribes have as much power and presence as Yankees, with politics of their own to navigate. Gratz has created an imaginative world with appeal far beyond its immediate middle-grade market.” —Publishers Weekly

“Gratz works an unusual twist into the familiar teens-saving-the-Earth-from-monsters trope: The protagonist is both archetypal hero and, at least potentially, nemesis…. Action, banter and steampunk-style tech aplenty--plus truly icky foes inspired, the author acknowledges, by the creations of H.P. Lovecraft--make this an appealingly fast-paced trilogy opener.” —Kirkus Reviews

“This hybrid of steampunk and alternate American history features a hell-raising girl's school, Atlantis, and three highly likable leads in a yarn rip-roaring from start to finish…. Moments of humor and pathos enliven the history and fantasy. Though the main plot concerning Archie's parents is resolved, there is plenty to address and discover in a sequel.” —Booklist

“This steampunk love-letter set in an alternative 1870s America, packs in quite a lot of action.” —School Library Journal

“A fast-paced, action-packed adventure of the best kind! The world of The League of Seven is wonderfully unique and refreshingly diverse--even the most reluctant of readers won't be able to put it down!” —Carrie Ryan, New York Times bestselling author

ALAN GRATZ was born in Knoxville, Tennessee. After graduating from the University of Tennessee, he began a succession of jobs—newsletter writer, high school teacher, university lecturer, bookseller, radio commercial writer, advertising copy writer, middle school teacher, library shelver—all the while working on various writing projects. In 2006, he published his first novel, Samurai Shortstop, an ALA 2007 Top Ten Book for Young Adults. Alan’s award-winning books include The Brooklyn Nine, Fantasy Baseball, Starfleet Academy: The Assassination Game, Prisoner B-3087, and The League of Seven, the first in a series of alternate history middle grade fantasy novels. When he’s not writing, he’s usually reading other people’s books or creating an awesome new costume for science fiction/fantasy conventions. He lives with his family in North Carolina.

Brett Helquist is the illustrator of many popular books for children.
Loading...
or
Not Currently Available for Direct Purchase