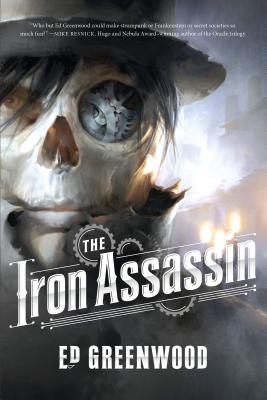 Victoria never ascended the throne; the House of Hanover held England only briefly before being supplanted by the House of Harminster. It is a time of gaslamps and regularly scheduled airship flights, of trams and steam-driven clockwork with countless smoke-belching stacks. London, the capitol of the Empire of the Lion, is a filthy, crowded, fast-growing city where a series of shocking murders threatens the throne itself.

Energetic young inventor Jack Straker believes he has created a weapon to defend the Crown: a reanimated, clockwork-enhanced corpse he can control. He introduces "the Iron Assassin" to the highly placed Lords who will decide if Straker's invention becomes a weapon of the Lion-or something to be destroyed.

It quickly becomes apparent that the Iron Assassin is more self-willed than Straker intended, and that the zombie's past life is far more sinister than Straker thought. Has he created a runaway monster? Or the best guardian the Lion could ever hope for?


Praise For The Iron Assassin…

“Greenwood weaves in several layers of political intrigue along with jaunty dialogue that adds a touch of humor to the story. A welcome addition to the ever-expanding steampunk genre.” —Booklist

“If you're looking for an imaginative and intriguing story within the Steampunk sub-genre, then this would definitely be one to check out.” —SF Revue

“Greenwood’s triumphant adventure is full of both brutality and psychological nuance.” —Publishers Weekly

Ed Greenwood is the bestselling author of the Band of Four series and creator of the bestselling and award-winning Forgotten Realms role-playing campaign setting. He lives in the Ontario countryside.
Loading...
or
Not Currently Available for Direct Purchase