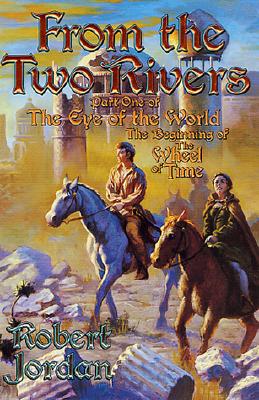 From The Two Rivers

The Eye of the World, Book 1

For Rand al’Thor and his pals, life in the sleepy village of Emond’s Field has been pretty dull. Until the appearance on festival night of Moiraine, a mysterious woman who claims to be an Aes Sdeai—a magician who can wield the One Power. Soon after, the village is attacked by Trollocs—a savage tribe of half-men half-beasts. Rand’s father is nearly killed. But for Rand, the news gets worse. It was not the village the Trollocs were after, Moiraine tells him. It was you, Rand.

Rand and his friends are forced to flee. But his escape will bring him face to face with the Dark One...the most powerful force of evil in the universe.


Praise For From The Two Rivers: The Eye of the World, Book 1…

“Recalls the work of Tolkien.”—Publishers Weekly

Robert Jordan was born in 1948 in Charleston, South Carolina. He taught himself to read when he was four with the incidental aid of a twelve-years-older brother, and was tackling Mark Twain and Jules Verne by five. He is a graduate of The Citadel, the Military College of South Carolina, with a degree in physics. He served two tours in Vietnam with the U.S. Army; among his decorations are the Distinguished Flying Cross with bronze oak leaf cluster, the Bronze Star with "V" and bronze oak leaf cluster, and two Vietnamese Gallantry Crosses with palm. A history buff, he has also written dance and theater criticism and enjoyed the outdoor sports of hunting, fishing, and sailing, and the indoor sports of poker, chess, pool, and pipe collecting.Robert Jordan began writing in 1977 and went on to write The Wheel of Time(R), one of the most important and best selling series in the history of fantasy publishing with over 14 million copies sold in North America, and countless more sold abroad.Robert Jordan died on September 16, 2007, after a courageous battle with the rare blood disease amyloidosis.
Loading...
or
Not Currently Available for Direct Purchase