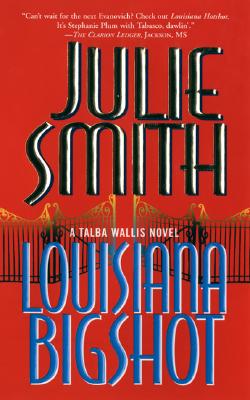 By night the glamorous Baroness de Pontalba, by day New Orleans’ hippest P.I., Talba Wallis is dumbfounded when she can’t do a simple background check on an old friend—Babalu Maya just doesn’t seem to exist on paper. Four days later, she doesn’t exist at all.

As Talba threads her way backward through Babalu’s short, difficult life, she finds an intricate pattern of violence and fear, and a shadowy Mr. Big with homicidal intent. Talba butts right into everybody’s business in Clayton, Louisiana, a small town with a big, ugly secret, where being black, mouthy, and smart are the three qualities most likely to get her killed. As she uncovers dark truths, events and people spiral into nasty motion in a story that has more twists and turns than the Mississippi River.

Julie Smith currently lives and writes in the Faubourg Marigny district of New Orleans, a neighborhood of nightclubs, restaurants and coffee shops where shady characters mix with artists. The author of nineteen novels, she was born and raised in Savannah before escaping to the University of Mississippi. After graduation, Smith became a reporter, first for the "New Orleans Times-Picayune" and later the "San Francisco Chronicle." She lived in the San Francisco Bay Area for many years before returning to New Orleans.

“Julie Smith writes like jazz should sound—cool, complex and penetrating
right to the heart.”—Val McDermid, bestselling author of The Last Temptation

“Julie Smith has created many wonderful characters, and private investigator Talba Wallis is the most complex and fascinating of them all. A lively supporting cast, a vibrant portrait of New Orleans, and a plot that’s sure to baffle make Louisiana Bigshot a standout. If you haven’t read Smith before, this is the time to start. If you’re a fan, you’re in for yet another treat.”—Marcia Muller, bestselling author of Dead Midnight