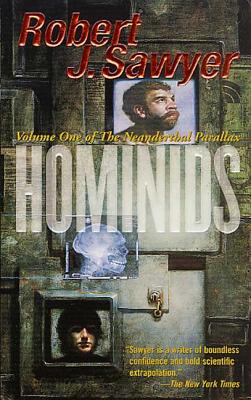 Volume One of The Neanderthal Parallax

Hominids examines two unique species of people. We are one of those species; the other is the Neanderthals of a parallel world where they became the dominant intelligence. The Neanderthal civilization has reached heights of culture and science comparable to our own, but with radically different history, society and philosophy.

Ponter Boddit, a Neanderthal physicist, accidentally pierces the barrier between worlds and is transferred to our universe. Almost immediately recognized as a Neanderthal, but only much later as a scientist, he is quarantined and studied, alone and bewildered, a stranger in a strange land. But Ponter is also befriended—by a doctor and a physicist who share his questing intelligence, and especially by Canadian geneticist Mary Vaughan, a woman with whom he develops a special rapport.

Ponter's partner, Adikor Huld, finds himself with a messy lab, a missing body, suspicious people all around and an explosive murder trial. How can he possibly prove his innocence when he has no idea what actually happened to Ponter?

Hominids is the winner of the 2003 Hugo Award for Best Novel.

Praise For Hominids: Volume One of The Neanderthal Parallax…

“Sawyer is a writer of boundless confidence and bold scientific extrapolation.” —The New York Times

“Hominids takes sophisticated paleoanthropological data, cutting-edge theoretical physics, and characters that will warm your heart; and mixes then into a charming, witty, and provocative novel. Hominids is anthropological fiction as its best.” —W. Michael Gear & Kathleen O'Neal Gear, authors of Raising Abel